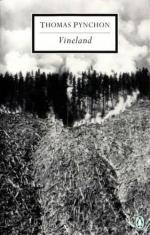 This detailed literature summary also contains Topics for Discussion and a Free Quiz on Vineland by Thomas Pynchon.

Vineland tells the story of the people surrounding Frenesi Gates, a one-time sixties radical who turns government informer and goes into hiding, abandoning her husband and young daughter. Pynchon moves fluidly in his narrative from character to character and between the time settings of 1970 and 1984, describing a loosely-knit group of people whose lives are greatly affected as Frenesi passes through them.

The novel opens in the fictional Northern California town of Vineland, where Zoyd Wheeler, Frenesi's ex-husband, lives in semi-seclusion with Prairie, his 14-year-old daughter who has no memory of Frenesi, her mother. Zoyd learns that Prairie is being targeted by Brock Vond, the charismatic federal prosecutor in love with Frenesi who first convinced her to betray her friends in 1970 and is now seeking revenge on her for leaving him. Zoyd sends Prairie away to escape Vond who is preparing a full-scale military invasion of Vineland.

Prairie meets up with DL Chastain, a ninja and former friend and lover of Frenesi who provides her with background about her mother's radical activities in the late sixties as a documentary filmmaker, and the story of how she become an informer for Brock Vond. DL Introduces Prairie to a group of female ninjas who have a commune in the heavily wooded hills of Northern California, where she is taken in and put in charge of the kitchen.

In the years since she left Zoyd and Prairie, Frenesi has entered into a witness protection program, remarried and has a son. When the most recent government check she receives bounces, she understands she has been cut loose owing to budget cuts under President Reagan. She and her husband and son return to Vineland where she has family.

Her return is arranged by Hector Zuniga, a federal drug enforcement agent who has a long relationship with Zoyd and who has gone partially insane from his addiction to television. Hector has a movie deal in the works and wants Frenesi to direct it.

All of the main characters converge on Vineland at the end of the novel, at the large annual reunion of Frenesi's traditionally radical extended family. Brock Vond's secret military force is there, too, and he lowers himself from a helicopter in an attempt to kidnap Prairie as she sleeps alone in the woods near the reunion. Just as he is about to grab her, the funding for his secret program is cut and he is hauled up. Prairie is ambivalent about her escape and the novel ends ambiguously with her longing for Vond to come back and carry her away.