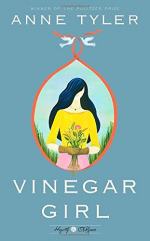 Anne Tyler
This Study Guide consists of approximately 35 pages of chapter summaries, quotes, character analysis, themes, and more - everything you need to sharpen your knowledge of Vinegar Girl.

Vinegar Girl is a modern novelization of Shakespeare’s “Taming of the Shrew.” It tells the story of Kate Battista who is strong-willed and acerbic in her everyday interactions. The novels opens with Kate tending her garden and getting a phone call from Dr. Battista, her father, requesting that she bring him the lunch he forgot. When she arrives at her father’s lab, Dr. Battista introduces Kate to Pyotr, who is his lab assistant.

Kate soon learns that Pyotr is at risk for deportation as his visa is set to expire. Because her father believes that his research study can only be successful with Pyotr’s assistance, he suggests that Kate and Pyotr enter into a marriage so that Pyotr can stay in the country. Initially, Kate is offended by the suggestion and refuses. As she goes on about her way, she begins to recognize that she may actually be lonely and desire a relationship. While she is unhappy at the prospect of having such a relationship thrust upon her, she wonders if it is all she deserves.

Kate works as a teacher’s aide at a preschool. As she observes the other young women in the school, she becomes increasingly self-aware of how she differs from the women. She thinks herself awkward and outcast. As Pyotr begins to try and woo her, Kate resists his advances. As she begins to warm up to Pyotr, she turns on him the moment she can sense that he senses her warmness.

Pyotr is attracted to Kate’s personality. He appreciates her directness and likes that she reminds him of the women he grew up around in his home country. Pyotr comes for dinner at the Battista house in an effort to ingratiate himself to Kate. He meets Kate’s younger sister Bunny, a teenager who is more interested in flirting and impressing Edward, the older boy next door.

Kate finally agrees to marry Pyotr, and Bunny cautions her. Bunny begins to notice the subtle ways that Pyotr appears to be controlling Kate. While Bunny warns her sister, she is also dealing with Edward. She claims to have become a vegetarian because Edward has told her about the detrimental effects of meat processing and cruelty to animals.

As the wedding nears, Kate is introduced to Mrs. Murphy, the elderly woman Pyotr shares a house with, and Mrs. Liu, the woman who helps Mrs. Murphy. Pyotr is introduced to Kate’s family as well. Kate’s Aunt Thelma tries to persuade Kate into having a larger wedding, but Kate refuses. Aunt Thelma settles for throwing the couple a small reception.

The day of the wedding arrives and Pyotr is late. When he does show up, he is angered, having just come from the lab where he discovered that the mice used in the research have been stolen. Pyotr and Kate marry, and after the conclusion of the ceremony, Pyotr accuses Bunny of stealing the mice. Kate defends her sister, but Pyotr is unconvinced. Kate suggests that Edward may be the culprit and Pyotr goes after Edward, which ends in a physical altercation.

After everything is settled with the police, the mice are recovered, and both parties agree not to press charges, Pyotr and Kate attend their wedding reception. Kate defends Pyotr’s reactions. The novel concludes with a flash forward into Kate and Pyotr’s marriage.

More summaries and resources for teaching or studying Vinegar Girl.