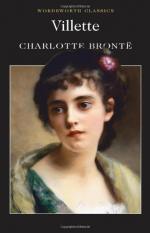 Charlotte Brontë
This Study Guide consists of approximately 113 pages of chapter summaries, quotes, character analysis, themes, and more - everything you need to sharpen your knowledge of Villette.

Jane Eyre is a kind of companion volume, since it deals with experiences undergone by Charlotte Bronte in her earlier years in England, while Villette is founded on later ones in Belgium. The two works are often contrasted: the relatively positive tone of the first being seen as quite different from the darker atmosphere of the latter. Jane Eyre is still far more popular than Villette, but many scholars today find the later work more substantial and satisfying, from a literary standpoint.

More summaries and resources for teaching or studying Villette.