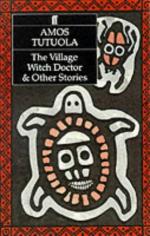 Tutuola's stories are loosely based on traditional Yoruba folktales, originally told in oral form. African critics pointed out early in Tutuola's writing career that he seemed to have borrowed heavily from the Nigerian writer Fagunwa, who wrote Yoruban folktales in the Yoruban language. Subsequent critics, however, have noted that Tutuola's stories are infused with his own particular style of narrative, and do not include the pointed moralizing which Fagunwa's tales emphasized. In his later writing, however, which would include "The Village Witch Doctor", Tutuola consciously included more specific elements of traditional Yoruba lore into his stories.

Although every culture has its particular style of folktale, critics have found many similarities in folktales across a spectrum of cultures. Italo Calvino, for example, in collecting and transcribing traditional Italian folktales, has noted the "rhythm" and "hard logic" with which these stories are told. Rhythm, according...