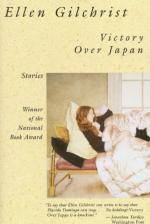 "Victory Over Japan" is narrated in the first person by Rhoda Manning, a third-grade girl. Like many of Gilchrist's female characters, Rhoda is completely self-absorbed, which makes her version of the events she recounts entirely subjective.

Allowing her characters to speak for themselves is typical of Gilchrist's fiction and "Victory Over Japan" is no exception. Since Rhoda is a child when she recounts these events, it is natural that her narrative voice will be that of a young child. But critics have commented that this style marks many of Gilchrist's stories even when the narrator is an adult woman. According to Dean Flower, "The distinctive trait of Gilchrist's colloquial style is its deliberate naiveté: short sentences, simple phrasing, lists. At moments this voice can sound like children's storytelling."

Like many of Gilchrist's stories, Rhoda's tale is gossipy, even amusing at points. An unexpected...