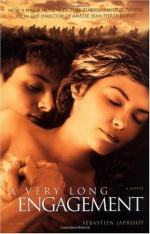 Sebastien Japrisot
This Study Guide consists of approximately 35 pages of chapter summaries, quotes, character analysis, themes, and more - everything you need to sharpen your knowledge of A Very Long Engagement.

When Mathilde Donnay’s fiancé is reported killed in action, she begins a quest to find him and four other soldiers who have been abandoned by their own army. Although Mathilde cannot walk, she can fend for herself, and she is intelligent and resourceful. Through interviews, letters, telegrams, and visits to important places Mathilde gathers information that leads her to discover the whereabouts of her lover, Manech. The reader must follow the clues as Mathilde does in order to find out what has happened between Saturday evening and Monday morning in January of 1917.

Mathilde’s quest begins when she is contacted by a man (Daniel Esperanza) who is wasting away from the Spanish influenza in a hospital near her. He tells her that her fiancé was not killed in action as she has been told. He was one of five men who were convicted of self-mutilation, sent to the front, and pushed out into no-man’s-land between trenches. It was at a place called Bingo Crepuscule. Her fiancé is the youngest. The others are a strong, quiet farmer, a trade union pacifist, a pimp, and a carpenter. Each had written a letter home, and Esperanza gives the letters to Mathilde. Using the names and letters that Esperanza provides her, Mathilde attempts to contact the loved ones of the four remaining soldiers. She also hires a lawyer and a private investigator and places an ad in the paper. The correspondence that follows provides her with insight into the events of January 6 to January 8 of 1917. Each letter from a widow or a fellow soldier, each visit to a cemetery or a battlefield, yields one more clue.

Mathilde’s lawyer tries to convince her that she is wrong, that the soldiers were all pardoned and sent back to the fighting, that her fiancé was killed in battle, but Mathilde holds on to what she knows is true. She finds a stamp spoken of in one of the letters. If the stamp is real, the letter is true she reasons, and her lover was alive on Sunday morning. She receives a letter from a woman who has had an affair with her husband’s best friend, another soldier and one of the condemned men. The letter to Mathilde helps her discover the whereabouts of a pair of German boots that have been traded several times among the soldiers at Bingo. Their final wearer is a man who assists Manech in no-man’s-land, carrying him out on his back. Mathilde manages to crack the code of a letter from one of the condemned men to his wife, and with it she is able to find the one man who carries all the secrets that lead to Manech. Another woman will not answer Mathilde’s questions until she has killed all the French officers who had a part in murdering her lover. When her work is complete, she is arrested and executed, but she tells Mathilde all she knows, and Mathilde’s quest is almost over.

Former soldiers remember pardons that never got delivered and a man arriving at a hospital with one red glove, a gift to her fiancé from a compassionate soldier. While Mathilde lives out her other lives--painting, teaching, building a new house--she keeps her life with Manech and all the letters in a mahogany box, afraid she might not find him but stubbornly hopeful that she will. With each new revelation, the reader figures out the mystery along with Mathilde and shares her joy as she is reunited with someone who is almost, but not quite, her fiancé. Her love for him has never wavered. Although there are many anti-war sentiments expressed in the novel, the overriding ideal is that of an enduring love that can conquer war and death and sadness.

More summaries and resources for teaching or studying A Very Long Engagement.