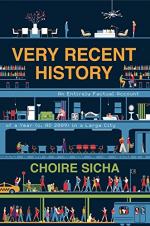 Sicha, Choire
This Study Guide consists of approximately 51 pages of chapter summaries, quotes, character analysis, themes, and more - everything you need to sharpen your knowledge of Very Recent History.

The following version of this book was used to create this study guide: Sicha, Choire. Very Recent History: An Entirely Factual Account of a Year (c. AD 2009) in a Large City. Harper Collins, New York, NY. 2013.

The novel, while essentially narrative in structure and plotting, is written with an anthropological sensibility – that is, with an eye towards examining and commenting on the society in which that narrative unfolds. Its events and commentaries play out in a series of short sections, or vignettes, some of which are only a few lines long. This visual / structural style is echoed in the style of the summary.

The novel begins with a prologue that describes the origins of the City. It also outlines the lifestyles maintained by the rich and famous, whose values and priorities define the lifestyles of the less rich and virtually unknown who live there. The story itself begins with an encounter between protagonist John and a street person, whose conversation about their respective lack of income foreshadows one of the novel’s primary thematic and narrative concerns – the getting, keeping, spending, history, and value of money.

As John struggles to cope with a steady stream of personal and professional crises, the narrative also explores the similar circumstances of his constantly changing circle of friends, most of whom, like John, are young gay men struggling to figure out who they are as workers, as lovers, as friends, and as homosexuals. Chad struggles to define how his new relationship with Diego will work; Tyler flirts too much; Jason parties too hard; Edward leaves his relationship and begins an on-again, off-again relationship with John; and John himself sinks into a powerful, swirling mix of promiscuity and despair that, at the end of the book’s first part, leaves him deeply sad and lonely.

Meanwhile, the narrative also develops its subplot, the story of how the two-term Mayor of the City, a billionaire businessman, manages to convince city council and the population that he should be allowed to run for a usually-prohibited third term in office. As John continues to struggle to find his way, the Mayor conducts his campaign.

While all these plot-lines develop, the narrative frequently interjects commentary on, and analysis of, various aspects of life in the city. Those commentaries consider, among other things, the history of money; how and why people smoked cigarettes; and the origins of a pervasive, debilitating virus.

Part 2 also begins with a prologue, this one discussing the origins and nature of different kinds of kingship – blood kingship, military kingship, and corporate kingship. The second part then continues the process of intertwining the three main narrative lines: the stories of John and his friends (particularly John’s developing relationship with Edward, and Chad’s deteriorating relationship with Diego); the story of the election (the Mayor is re-elected); and considerations of various aspects of life in the city. In Part 2, these considerations include examinations of immigration and population; patents; and the loan / credit system.

Eventually, as the narrative draws to the close and the feeling of lingering economic crisis dissipates in both the City and the story, Chad considers having an affair; the Mayor settles in to his new term in office; and John and Edward resolve their concerns about their relationship, at least for a while, John’s insecurity eased by his moving into a new job.