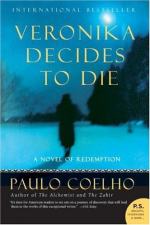 Paulo Coelho
This Study Guide consists of approximately 39 pages of chapter summaries, quotes, character analysis, themes, and more - everything you need to sharpen your knowledge of Veronika Decides to Die.

This detailed literature summary also contains Topics for Discussion and a Free Quiz on Veronika Decides to Die by Paulo Coelho.

"Veronika Decides to Die" tells the story of a young woman's transformation from despairing would-be suicide to affirmed and then affirming survivor. This book offers an archetypal story of hope, portraying a situation in which joy, freedom, integrity and truth all remain possible under the most challenging and limiting of circumstances. In doing so, the narrative thematically explores the nature of insanity, the importance of living a genuine life, and the threats to individual identity imposed by closed communities and the rules under which they function.

The narrative begins with Veronika's taking four packets of sleeping pills and with a description of her reasons for wanting to end her life and for choosing this particular method of doing so. As she waits for the pills to take effect, Veronika reads an article from a magazine that triggers such a strong reaction in her that she decides to write a letter of protest to the magazine's editor, realizing as she does so that the letter will probably be taken as her suicide note. At first she finds the thought amusing, but then as the sleeping pills begin to take effect, she becomes less amused and more uneasy, finally reacting with fear to the idea that she is about to die.

Veronika does not die, but comes to consciousness in the notorious lunatic asylum, Villete, where she is told by Dr. Igor that her attempt to kill herself, initially unsuccessful, will inevitably succeed. She has damaged her heart to the point where it will be unable to sustain her life for much longer than five days. Locked in a ward with other "insane" people, Veronika struggles to come to terms with both her failure and her impending success.

Over the days that follow, Veronika's questions about whether she is truly insane are met with varying responses by several of the institution's nurses, by Zedka, a fellow patient whose soul travels outside her body in a process narration refers to as "astral projection," and by Mari, a member of a highly functional group of inmates known as The Fraternity. Veronika also experiences a gradual awakening of interest in experiences both new and old, finding herself attracted to a schizophrenic patient, Eduard, and drawn to a piano in the asylum's common room. There, under the night of the new moon, she returns to her first love, music, and as Eduard watches, finds herself playing in ways she never had before. She also, in response to both her attraction to Eduard and the advice of Mari to try what had once been forbidden, masturbates to the point of having several climaxes. All this, in spite of having a series of painful and frightening heart attacks, arouses in Veronika the desire to try even more experiences, and eventually the desire to live as fully as she can in the time remaining to her.

Meanwhile, narration also explores the experiences, both past and present, of Veronika's fellow inmates. Zedka's fascination with what the narrative describes as the ideal, "Impossible Love," Mari's rejection of her life as a lawyer in favor of a life of service, and Eduard's search for and exploration of "Visions of Paradise" are all described within the context of Veronika's gradual experience of awakening to the possibility of a more free and full life. This sort of life, the narrative suggests, is held to be "insane" by those in the "real" world but which, the narrative contends, is the only sort of life that is truly "lived."

Eventually, Zedka, Mari and Eduard all, in various ways and for various reasons, leave the confines of Villete. Eduard is accompanied by Veronika who is determined to live what she believes to be what little life she has left to the fullest. At this point, narration reveals that for purposes of his own, Dr. Igor has manipulated Veronika into believing she is about to die, when she is in fact going to live.

More summaries and resources for teaching or studying Veronika Decides to Die.