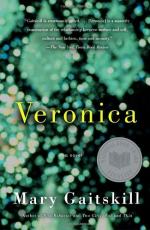 Related Topics
The Mare
Bad Behavior: Stories
This Is Pleasure

Mary Gaitskill
This Study Guide consists of approximately 30 pages of chapter summaries, quotes, character analysis, themes, and more - everything you need to sharpen your knowledge of Veronica.

This detailed literature summary also contains Quotes and a Free Quiz on Veronica by Mary Gaitskill.

Veronica, by Mary Gaitskill, is a story that takes place on one day in Alison Owen's life as she hikes a canyon near San Rafael, California. Alison is a 46-year-old, former fashion model, who now lives on disability due to chronic pain from injuries sustained in a car accident. Alison also has hepatitis and is markedly diminished from her younger days. As Alison hikes, she recalls her life growing up in San Francisco in a dysfunctional home from which she ran away in the 1970s. Alison also had glory days as a fashion model in Paris, but she was betrayed and robbed by her boyfriend who ran the modeling agency.

Alison returned home and attended community college, but she missed the high life and moved to Manhattan to model again. While there, she met Veronica, a woman 16 years older than Alison. In spite of the age difference, they became friends. Alison did not understand Veronica's lifestyle or choice of abusive lovers but she remained her friend, when Veronica's other friends abandoned her because of some of the choices she made.

Though Alison moved to Los Angeles to get work in music videos, she remained in contact with Veronica who was dying from AIDS. Alison flew back and forth to see Veronica for six months until Veronica died. Alison has had many complicated relationships in her life, but she highly valued the one with Veronica because she was always honest and authentic with her.

More summaries and resources for teaching or studying Veronica.