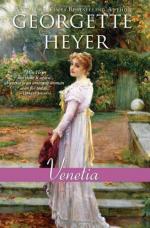 This detailed literature summary also contains Topics for Discussion and a Free Quiz on Venetia by Georgette Heyer.

Venetia, set in regency England, is a romance novel about a woman on the verge of spinsterhood and a rogue. Venetia is twenty-five years of age, virtually "on the shelf," and is the only person who is unconcerned about this fate. When she meets and falls in love with Damerel, who is held to be a man of low character, she must be clever if she is going to convince him that it is okay for them to marry.

Venetia is a woman in her mid-twenties who has spent her life in virtual seclusion. Her mother ran off (although Venetia has been told she died) her father left her in Undershaw manor to take care of the manor, herself, and her lame little brother, Aubrey. She has two suitors, but likes neither. She has never traveled far enough to speak of, and was even denied the tradition of 'coming out' as a young woman.

For most of her life, she has heard stories of Damerel, who ran off with a married woman who left him for another before they said their vows. His crimes were never explained to her or her older brother Conway, so they devised their own stories of the "evil baron" when others would not divulge. It is generally advised that people of police society stay away from him, which is easy at first because he rarely visits his estate, Elliston Priory.

When Venetia encounters Damerel for the first time, she is picking blackberries on his property. The sparks are instantaneous, and when Aubrey is hurt and is taken back to the Priory, they become close.

Venetia and Damerel fall in love with one another, and both entertain thoughts of marrying one another. However, Damerel will not propose because he fears that it will be social suicide for her. Venetia does not care about such things, but can't convince Damerel or her protective aunt and uncle of this.

When Venetia learns that her mother is not dead, but is shunned from polite society, she sees her chance. She convinces her mother, who cares nothing for her, to write her a letter inviting Venetia to stay with her and her husband. Although the invitation is not real, Venetia uses it to tell Damerel that she will go stay with her mother if he does not marry her. It will be a social disaster either way. And so in the end, Damerel gives in.