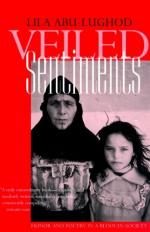 Lila Abu-Lughod
This Study Guide consists of approximately 24 pages of chapter summaries, quotes, character analysis, themes, and more - everything you need to sharpen your knowledge of Veiled Sentiments.

Veiled Sentiments: Honor and Poetry in a Bedouin Society Summary & Study Guide includes comprehensive information and analysis to help you understand the book. This study guide contains the following sections:

This detailed literature summary also contains Topics for Discussion and a Free Quiz on Veiled Sentiments: Honor and Poetry in a Bedouin Society by Lila Abu-Lughod.

Lila Abu-Lughod, author of Veiled Sentiments, traveled to the Western Desert of Egypt to study ghinnawa poetry of the Awlad 'Ali Bedouin tribe. The daughter of a Caucasian American woman and an Arab American father, Abu-Lughod was introduced to the Awlad 'Ali by her father. She lived with the tribe as an adopted daughter for two years between 1978 and 1980.

Part One of the book explores Bedouin culture so that the poetry can be examined in context. Abu-Lughod writes extensively about Bedouins' identity in relationships, the Bedouin code of honor, and romantic relationships. Bedouin culture demands that individuals keep their feelings to themselves and not show weaknesses or sentiments. There is also a large emphasis on honor, both individual and especially family. Marriages are arranged by families to retain and enhance honor. The effect of a marriage on an entire family is more important than the effect on an individual.

Independence is another important aspect of Bedouin culture. Women and children are dependent on men, but they can assert themselves in small ways, even if only by offering their submission willingly. This allows them to be honorable in their position in life. The more financially independent a man is, the more wives he can have. Supporting many dependents signals respect and honor.

Part Two of the book discusses ghinnawa poetry, the poetry of everyday interactions. Ghinnawa poetry allows Bedouins to express their feelings in a traditional, condoned way without breaking the code of honor. Ghinnawa poetry can be spontaneous, or it can be the recitation of verses handed down from generation to generation.

The main themes of ghinnawa poetry are sadness, longing, and romantic love. These are topics that are not sanctioned for everyday talk. Those who speak of their sadness or romantic love draw shame on themselves, but if they recite poetry along these themes, they elicit empathy or sympathy. Therefore, ghinnawa poetry provides an outlet for the Bedouins to show human frailties and still abide by their code of honor.