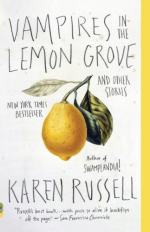 Plot Summary
+Chapters Summary and Analysis
"Vampires in the Lemon Grove"
"Reeling for the Empire"
"The Seagull Army Descends on Strong Beach, 1979" – "Proving Up"
"The Barn at the End of Our Term" – "Dougbert Shackleton’s Rules for Antarctic Tailgating"
"The New Veterans"
The Graveless Doll of Eric Mutis
Free Quiz
Characters
Symbols and Symbolism
Settings
Themes and Motifs
Styles
Quotes
Order our Vampires in the Lemon Grove Study Guide

Karen Russell
This Study Guide consists of approximately 42 pages of chapter summaries, quotes, character analysis, themes, and more - everything you need to sharpen your knowledge of Vampires in the Lemon Grove.

Vampires in the Lemon Grove Summary & Study Guide includes comprehensive information and analysis to help you understand the book. This study guide contains the following sections:

This detailed literature summary also contains Quotes and a Free Quiz on Vampires in the Lemon Grove by Karen Russell.

“Vampires in the Lemon Grove” is a collection of eight contemporary and historic short stories by Karen Russell. The short stories alternately share common themes of horror, death, nature, theft, and the past.

In the title story, “Vampires in the Lemon Grove”, Clyde and his wife, Magreb, both vampires, dwell in Italy where they feast on lemons. Having learned they do not need human blood to survive, and having learned that most information about themselves (such as having to sleep during the day) is mere rumor, Clyde and Magreb have reformed their lives by seeking out food sources other than human blood. Only the 17-year-old girl, Fila, who runs the produce stand at the lemon grove knows that Clyde is a vampire. As time passes, Clyde and Magreb are no longer able to slake their thirst or cure their hunger with lemons. While in town, Clyde runs into Fila and loses control, feeding on her to the point that he kills her. Clyde returns to his wife, wondering how she will think of him now.

In “Reeling for the Empire,” Kitsune has sold herself to an Emperor-approved Japanese silk mill overseen by the Agent. The Agent travels Japan, purchasing girls from families with bad debts, and transforms them into half-human, half-silkworm creatures to reel silk, Japan’s primary export in the late 1800s. Kitsune and the other girls soon tire of being kept locked up and not being paid for their work, so they trap and kill the Agent in a cocoon. They then spin cocoons for themselves so that they may transform into moths.

In “The Seagull Army Lands on Strong Beach, 1979,” Nal is not happy with how the Summer of 1979 is going for him, mainly because his older brother has managed to begin seeing Vanessa, the girl that Nal has long had a crush on. This occurs at the same time the town sees a massive seagull flock land, the largest in history. The seagulls are a nuisance, stealing things left and right from residents. Thinking of the seagulls taking what they want as a part of their nature, Nal preempts his brother from purchasing a ring for Vanessa for her birthday by purchasing the ring himself, and giving it to her. She is thrilled with the gift, and the two have sex. Nal mimics the swirling motion of flying seagulls as he has sex with Vanessa.

In “Proving Up,” Miles Zegner and his homesteading family share a window with their neighbors in late-nineteenth century Nebraska so that they may temporarily install it in their homes when the Inspector comes around. The settles of Nebraska, living on land provided under the Homestead Act, must meet certain requirements to finally own the land, such as having a glass window in their homes. Miles is sent out to bring the window to the neighbors when word comes that the Inspector will soon appear. Miles is trapped in a freak snowstorm, however, during which time he encounters the dead soul of an earlier settler who takes the window and then steals Miles’s life, saying the window was stolen from someone else.

In “The Barn at the End of Our Term,” a Kentucky barn at some point in the past becomes a wayward place for the souls of U.S. presidents, where they inhabit the bodies of horses. No one can make sense of this, but they all want to escape. Rutherford Hayes eventually figures out that escaping the barn doesn’t mean escaping the body of the horse, just as leaving office doesn’t mean people will remember them for being anything other than presidents.

In “Dougbert Shackleton’s Rules for Antarctic Tailgating,” Dougbert journeys to Antarctica each year with friends from around the world to watch the whales eat krill. The visitors choose sides –for Team Whale or Team Krill. Dougbert explains that rooting for Team Krill is a tough job, but it is one that must be done.

In “The New Veterans,” Beverly, a massage therapist, takes on a recently-returned Iraq War veteran, Derick Zeiger. She is able to treat his PTSD through massaging his back, which is covered with a chilling tattoo of a fatal mission in Iraq. She is able to alter his memories and transform his experience in Iraq so he no longer suffers having to recall the death of his friend, Mackey.

In “The Graveless Doll of Eric Mutis,” Larry and his three high school friends, who bullied a kid named Eric Mutis years before, are stunned to discover a doll-like scarecrow resembling Eric in the park. As time passes, pieces of the scarecrow begin to disappear, causing the boys to wonder what is going on. Larry believes that the scarecrow is somehow a physical transformation of Eric caused by himself and his friends for so mercilessly tormenting Eric for so long. Larry ends up deciding to keep watch over what remains of the scarecrow to protect it against whatever is mauling it.

More summaries and resources for teaching or studying Vampires in the Lemon Grove.

Vampires in the Lemon Grove from BookRags. (c)2022 BookRags, Inc. All rights reserved.