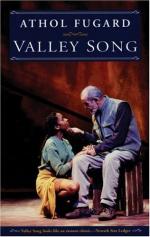 Athol Fugard
This Study Guide consists of approximately 50 pages of chapter summaries, quotes, character analysis, themes, and more - everything you need to sharpen your knowledge of Valley Song.

In the following review of the Washington, D.C. production of Athol Fugard's play Valley Song, Nelson Pressley overviews the play's plotline and calls it a provocative and "often elusive" politically-edged performance, characteristic of Fugard's works.

South African playwright Athol Fugard, author of Master Harold . . . and the Boys, Sizwe Banzi Is Dead, Statements After An arrest Under the Immorality Act and other plays protesting racial conditions in his homeland, doesn't have apartheid to kick around anymore.

Still, Valley Song now at the Kennedy Center's Eisenhower Theater in a production directed by and starring the playwright, is typical of Mr. Fugard's works: It is topical, earnest and sometimes movingly lyrical. It is still informed by racial oppression things don't change overnight, after all. Spiritual repression, the theme of his incandescent The Road to Mecca, plays a big part here, too.

But the chief theme is change. At its...

More summaries and resources for teaching or studying Valley Song.

Valley Song from Gale. ©2005-2006 Thomson Gale, a part of the Thomson Corporation. All rights reserved.