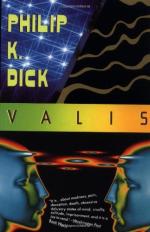 Philip K. Dick
This Study Guide consists of approximately 56 pages of chapter summaries, quotes, character analysis, themes, and more - everything you need to sharpen your knowledge of Valis.

This detailed literature summary also contains Topics for Discussion and a Free Quiz on Valis by Philip K. Dick.

Valis follows the spiritual quest of author Philip K. Dick and his alter ego, Horselover Fat, as an extraterrestrial power draws him towards its Gnostic message of the conquest of evil and death.

Valis by Philip K. Dick is a fictionalized, partial autobiography. Phil, a successful science fiction author, narrates the story but often in Fat's voice, claiming that this provides objectivity. Phil is a cool, pragmatic individual while Fat is a rich Renaissance mind disintegrating into insanity. Fat attempts suicide twice before he first confides to Phil in March of 1974 vivid dreams about three-eyed people. He sees St. Elmo's Fire and takes on a new, unfamiliar personality. Some of the information transmitted to him in a burst of pink laser light saves son Christopher's life, for it reveals an overlooked hernia, which is successfully repaired.

Fat also experiences troubling visions of rushing, floating colors and visions of Ancient Rome and modern California superimposing and merging in time. He begins spending his nights composing an enormous journal, which he calls the Exegesis and later extracts into a briefer Tractate that deals with how the cosmos is formed. Phil has successfully stopped taking drugs but cannot help himself from helping others, and the deaths of two women friends shake him badly. Phil fears that Fat has lost all touch with reality. Fat, by contrast, concludes that the universe is ruled by irrationality and that space and time do not exist. He calls the being that beams information into his head Zebra, for its ability to hide until the time is right. Later, he learns that its name is VALIS.

In his dreams, Fat receives a cipher that allows him to make contact with Eric and Linda Lampton, who together star in a science fiction film that has eerie parallels to Fat's experiences. It is called Valis and features the powerful, benign extraterrestrial being, VALIS. With friends David and Kevin, Phil and Fat meet the Lamptons, whom they determine to be crazy, but become devotees of their two-year-old daughter, Sophia, who fits the bill as the world's Fifth Savior. She commissions them to proclaim her doctrines. Sophia obliterates Fat by denying his existence, freeing Phil where analysts have failed. Phil recognizes that Fat is a mental projection, but misses his companionship. When Sophia dies, Fat returns and begins a worldwide search for the Savior, while Phil watches television for subliminal messages from VALIS.

More summaries and resources for teaching or studying Valis.