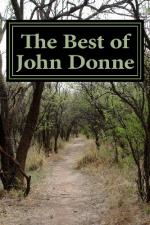 Related Topics
Holy Sonnets
The Flea
The Canonization
The Relic: Poem
The Bait
The Apparition
The Good-Morrow
The Sun Rising
The Ecstasy
No Man Is an Island (John Donne)
To His Mistress Going to Bed
An Anatomy of the World (Poem)
Sappho to Philaenis (Poem)
A Valediction: of Weeping
The Calm

"A Valediction: Forbidding Mourning" shows many features associated with seventeenth-century metaphysical poetry in general, and with Donne's work in particular. Donne's contemporary, the English writer Izaak Walton, tells us the poem dates from 1611, when Donne, about to travel to France and Germany, wrote for his wife this valediction, or farewell speech. Like most poetry of Donne's time, it did not appear in print during the poet's lifetime. The poem was first published in 1633, two years after Donne's death, in a collection of his poems called Songs and Sonnets. Even during his life, however, Donne's poetry became well known because it circulated privately in manuscript and handwritten copies among literate Londoners.

The poem tenderly comforts the speaker's lover at their temporary parting, asking that they separate calmly and quietly, without tears or protests. The speaker justifies the desirability of such calmness by developing the ways in which the two share a holy love, both sexual and spiritual in nature. Donne's celebration of earthly love in this way has often been referred to as the "religion of love," a key feature of many other famous Donne poems, such as "The Canonization" and The Ecstasy. Donne treats their love as sacred, elevated above that of ordinary earthly lovers. He argues that because of the confidence their love gives them, they are strong enough to endure a temporary separation. In fact, he discovers ways of suggesting, through metaphysical conceit, that the two of them either possess a single soul and so can never really be divided, or have twin souls permanently connected to each other. A metaphysical conceit is an extended metaphor or simile in which the poet draws an ingenious comparison between two very unlike objects. "A Valediction: Forbidding Mourning" ends with one of Donne's most famous metaphysical conceits, in which he argues for the lovers' closeness by comparing their two souls to the feet of a drawing compass—a simile that would not typically occur to a poet writing about his love!