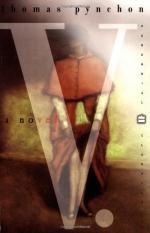 Plot Summary
+Chapters Summary and Analysis
Chapter 1, In which Benny Profane, a schlemihl and human yo-yo, gets to an apocheir
Chapter 2, The Whole Sick Crew, and Chapter 3, In which Stencil, a quick-change artist, does eight impersonations
Chapter 4, In which Esther gets a nose job, Chapter 5, in which Stencil goes West with an alligator, and Chapter 6, In which Profane returns to street level
Chapter 7, She hangs on the western wall
Chapter 8, In which Rachel gets her yo-yo back, Roony sings a song, and Stencil calls on Bloody Chiclitz, and Chapter 9, Mondaugen's story
Chapter 10, In which various sets of young people get together, and Chapter 11, Confessions of Fausto Maijstral
Chapter 12, In which things are not so amusing
Chapter 13, In which the yo-yo string is revealed as a state of mind, Chapter 14, V. in love, and Chapter 15, Sahha
Chapter 16, Valletta, and Epilogue, 1919
Free Quiz
Characters
Objects/Places
Themes
Style
Quotes
Topics for Discussion
Order our V Study Guide

Thomas Pynchon
This Study Guide consists of approximately 39 pages of chapter summaries, quotes, character analysis, themes, and more - everything you need to sharpen your knowledge of V.

This detailed literature summary also contains Topics for Discussion and a Free Quiz on V by Thomas Pynchon.

V. is a fiction novel by Thomas Pynchon. Benny Profane enters a tavern in Norfolk, Virginia called the Sailor's Grave on Christmas Eve, 1955. Another seaman, Pig Bodine, arrives and tells him about Pappy Hod, who split up with his young wife, Paola, from Malta. Paola had used Pappy to get to America. A riot breaks out, the police come and Profane, Pig and Paola flee, ending up in new York. Profane sends Paola to a friend of his, Rachel Owlglass. He spends a day on the subway, riding back and forth, and meets Tolito, Jose and Kook, three Puerto Ricans. Profane agrees to work with their brother, Angel and Angel's friend Geronimo to catch alligators in the sewers of New York City. Rachel is living and working in New York City as a interviewer at an employment firm. She is part of the Whole Sick Crew, a group of disaffected people who spend most of their time partying. Her friend, Esther, dates her plastic surgeon, gets pregnant by him, and later goes to Cuba for an abortion. Profane works to catch alligators until there are none left, and runs into Rachel at her employment agency. Profane eventually becomes one of the Crew after he is fired from his second job as a night watchman in New York City, and he also dates Rachel.

Herbert Stencil is seeking a woman he knows as V., and has traveled the world in search of her. He finds a mention of her in his father's diary, and he decides that he must unravel the mystery behind her appearances. She appears as Victoria Wren in Egypt in the late 1800's and later again in Florence and in Paris, as a rat in the New York sewers, and as Vera Meroving in Africa, among others. While in Florence, V. meets a young man, Evan Godolphin, who becomes her protector. Fausto Maijstral, Paola's father, encounters V. as the Bad Priest in Malta, after a beam falls on her and she lies dying. Stencil and Benny Profane go to Malta to try and track down V. Stencil finds that a woman named Viola took the eye and went to Stockholm in 1944, and Stencil will follow that trail. Sidney Stencil, Herbert Stencil's father is working as a spy in Malta, after the end of World War I. He meets V. as Veronica Manganese. Tensions in the country come to a head and there are riots, but they soon stop. Stencil, no longer needed by Veronica, sails his ship out into the sea. A water spout picks up the ship, which then plunges into the depths of the sea.

More summaries and resources for teaching or studying V.