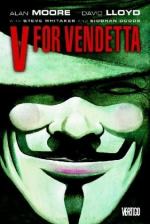 This detailed literature summary also contains Topics for Discussion and a Free Quiz on V For Vendetta by Alan Moore.

V for Vendetta is about a man, his quest for revenge and his desire to right the wrongs in his society. The story takes place in England, in 1997. It is a world changed by war, famine and disease. In response to these changes, the government also changes. It is a fascist dictatorship, which uses extensive means to control the people. As a result, the populace slinks into a mode of enforced contentment, making no effort to take back their freedom.

V rescues a woman, Evey, from a dangerous situation and takes her under his wing. He makes it clear from the beginning what he is about, but because he speaks in riddles, rhymes and literary quotations, she does not understand. V is a man always dressed in a costume with a cloak, hat, wig and mask. He is never seen out of costume. He is a shadowy and mysterious individual. V frequently appears almost from out of nowhere. He is skilled in martial arts and in stealth. While carrying out his vendetta against those that have oppressed him in previous years, he is also trying to light a fire underneath people's feet, in order to push them into action after being inactive for so long. One of the means by which he does this is by blowing up government buildings.

V's vendetta stems from a period in his life, when he was detained at the Larkhill Resettlement Camp. While the reasons for his confinement are never revealed, what happens to him is recounted in great detail. V suffered at the hands of inhuman keepers. By his own devices, he manages to escape the prison by blowing it up. After that point, he exists to go after those responsible for what happened to him. Each of those people has since moved on to higher roles in the government, but V still goes after each one, until he settles the score.

Meanwhile, with Evey in his charge, he does everything he can to educate her and pass along his message. While in the beginning she does not comprehend everything that V tells her, it all comes together for her at the end. Even to Evey, V is mysterious and never gives a straight answer. Insistent on showing Evey how to live free from fear and injustice, he imprisons and tortures her. The whole time, he is able to keep his identity well hidden from her. At the end of it all, his plan works. She overcomes her greatest obstacles and learns a great deal from V. After he dies at the end, she takes his place as a hardened revolutionary determined to spark the people of England into action.