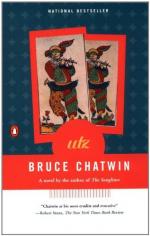 This detailed literature summary also contains Topics for Discussion and a Free Quiz on Utz by Bruce Chatwin.

Utz keeps a fabulous collection of Meissen porcelain crammed into a tiny two-room flat. He is the perfect source for a story about the psychology of the collector. Through the Nazis and the communists, Utz has sacrificed to hold onto his porcelains because life is what he feels in their company, not what he does to keep them. His collection disappears after his death. The ensuing search illuminates Utz in a more revealing light, without solving the mystery. Did Utz's collection give him wisdom and long life, like porcelain gave Chinese emperors? Did he give life to his porcelains, like Rabbi Loew to his golem? Where is his collection?

The story begins with Utz's funeral, a spectacle from anticommunist farce, with a cleaning lady in the aisle who refuses to stop scrubbing so the casket can pass. There are only two mourners, Utz's friend Dr. Orlik and his devoted servant Marta. They attend a funeral breakfast afterward, the only two at a breakfast prepaid by Utz for twenty.

The narrator is in Prague to research a book about the psychology - or psychopathology - of collectors, and he meets with Utz, a man of encyclopedic knowledge of his subject and a collection of one thousand Meissen porcelains, all crammed into his tiny, two-room apartment. Utz is with Orlik when they meet the narrator for lunch, and then the narrator and Utz walk and converse. Utz is forgettable and nondescript. He wears spectacles and, perhaps, a moustache, or perhaps not. The narrator cannot remember. Utz is German, possibly a baron descended from minor nobility, raised in Dresden with a month each summer at the castle of his grandmother, near Prague. She was Jewish, a convert to Catholicism and an heiress whose global investments sustain Utz, her only grandchild, his whole life.

Among Utz's grandmother's treasures one summer, Utz discovers a particular porcelain Harlequin. Four years later, she sends the Harlequin to comfort him when his father is killed. Utz finds his vocation in his love of the Harlequin, and he devotes himself to porcelain, its scholarship and collection. He crates his collection and sends it to Ceske Krizove, his grandmother's castle, at the beginning of the war. He gives the castle and the estates to the government after the war and gets a Czech passport and an apartment in Prague. His collection is his abiding passion, and it makes him impervious to the many depredations he suffers from the somber century in which he lives. He is unsuccessful in love, but his life is full and has meaning because of the life, elegance, courtliness and passion conferred by his porcelains.

Utz tells this story to the narrator, in which the folly of life in a totalitarian regime is a constant theme, addressing life's concessions and compromises, the bullies the government creates and the tricks by which pleasure is snatched. While Utz and the narrator sit for a time at the Old Jewish Cemetery, the conversation turns to golems, automatons that mystical Jews were thought to create from mud, as God created Adam by shaping him in mud - like a golem or a porcelain - and breathing life into him. Utz's collection gives him life, and he gives life to them. Utz believes that museums are the enemies of collected objects, which only come to life in collectors' hands. Later, at his apartment, he talks about alchemy. He thinks alchemy was a quest, not for gold, but for immortality, whether as a substance to ingest or the substance of the vessel - perhaps porcelain - that holds what is ingested. The narrator leaves Utz at the end of that day, not returning to Prague for twenty years, after Utz is long dead and his collection has vanished.

As the narrator searches for clues to Utz's collection, a new portrait emerges of Utz, assembled from the stories of people who knew him. His dealer in New York says Utz did, indeed, have a moustache, and it is the key to the man. The Utz that is revealed has more life, more depth and much more love. His life and his bed are filled by a procession of light-opera sopranos. His trips to Europe allow him to sell off the state's porcelain to bring them hard currency. Marta is his wife, at first just to fool the bureaucrats and keep Utz in his flat, until 1967, when she comes to his bed. After a stroke in 1973, he signs a paper that bequeaths his porcelains to the state museum, in exchange for an end to the museum staff's visits to check on them. When he dies of a second stroke in 1974, Marta keeps a vigil over his coffin and lies about the next day's itinerary to Utz's many grieving sopranos and the museum staff. They all go to the wrong church and the wrong cemetery, and then to the funeral breakfast at the wrong time, so that as they arrive, Marta is departing for her sister's, taking with her all knowledge of the porcelains that have vanished from Utz's apartment.

The narrator follows some clues while in Prague. He imagines that when Utz and Marta leave the church, husband and wife, Utz finally knows that he holds a real life and real love in his arms. He has no more need of his collection, recognizing it for the mere crockery it has always been, and, with Marta, destroys it. The narrator cannot convince even himself, however, and the story ends with an old peasant woman answering her door, saying that yes, she is the Baroness Utz.