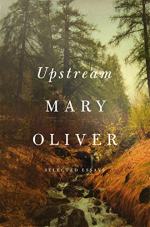 The following version of this book was used to create this guide: Oliver, Mary. Upstream. Penguin Press, 2016.

Mary Oliver begins by sharing her memories in nature from her childhood, one day she walked up a stream for hours because it made her feel like her heart was opening.

Walt Whitman’s writing had a huge influence on Oliver when she was young, and she read his books in the forest instead of going to school.

She walks her dog near her home and he chases a fox on a frozen lake, Oliver likes to observe the wild animals that live there.

Of Power and Time

She writes about the importance of solitude for creative work and that one needs to give themselves over to their creative energy.

One day, Oliver and her partner went fishing, enjoying the day and the fact that they did not catch anything.

She describes the ecosystems in her home town, with many details about all the different animal species. Oliver clearly spends a lot of time observing the wildlife and finding out about it from others.

The author contemplates her vegetarianism. On the one hand, she wants to transcend her appetite. But, on the other hand, she respects the forces and workings of nature. She feels she has inherited responsibility from the writers and thinkers she has read, especially their curiosity and respect.

Oliver writes of Emerson's life, which ended with him settling in Concord, forming a strong group for intellectual exchange with fellow thinkers. They are now known as the transcendentalists. She also writes of his language, amazed by the way in which he explored complex abstract concepts through very concrete subject matter.

The Bright Eyes of Eleonora: Poe's Dream of Recapturing the Impossible

Oliver explores Poe’s writing next, noting the repetition of a pale, high-browed, dark-haired woman. She also has a theory that he tried to see the world as though death is reversible, and that he sought evidence for this view all his life.

Some Thoughts on Whitman

Then she writes of Whitman – his mysticism, his belief in a richer life, and the way in which he addresses the reader as though speaking to them intimately. He was ridden by loneliness, and Oliver thinks this was a driving force for him.

Oliver describes a frozen field of grass that stunned her with its beauty at dawn, the time of day is very significant to her.

Staying in a rental house, Oliver watches a spider in its web. It has six egg sacks from which its babies gradually hatch. And it catches a cricket, the killing process of which Oliver is fascinated to observe. She appreciates that she was able to learn something new and revelatory from a seemingly simple spider.

On a winter morning, Oliver brought an injured seagull home and began to take care of it. It lived with them for months, playing with them and bringing a positive presence into their lives. Even though its health deteriorated continually, it had a lot of energy.

Oliver has spent several winters searching the woods in Provincetown for the nest of a great horned owl. She describes the other things she observes on her unsuccessful mission.

A black bear once visited Provincetown, having walked through all of Massachusetts. Oliver shares that she thinks it should have become a resident.

This short piece is the tale of a stray dog who broke his chain to run to Oliver's house and play with her dogs until she adopted him. He inspiringly caused the town's dog officer to resign.

The author makes lunch from fish she finds lying on the beach. And she describes the significance of the local forest, where her dogs are buried and swans once flew over her looking like angels.

Oliver tells of her carpenter friend who likes to write during breaks from work. Oliver once built herself a little house in her garden and has made many little tables and shelves, though they are never perfect.

Oliver thanks Provincetown for the decades she has spent living there. She concludes that, though it is small, it holds everything she needs. And she is nostalgic for the way it used to be, a quiet fishing town with Mediterranean light.