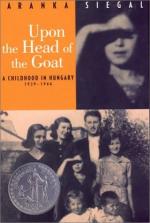 Aranka Siegal
This Study Guide consists of approximately 22 pages of chapter summaries, quotes, character analysis, themes, and more - everything you need to sharpen your knowledge of Upon the Head of the Goat.

Upon the Head of the Goat: A Childhood in Hungary 1939-1944 Summary & Study Guide Description

Upon the Head of the Goat: A Childhood in Hungary 1939-1944 Summary & Study Guide includes comprehensive information and analysis to help you understand the book. This study guide contains the following sections:

This detailed literature summary also contains Topics for Discussion and a Free Quiz on Upon the Head of the Goat: A Childhood in Hungary 1939-1944 by Aranka Siegal.

Upon the Head of the Goat is an autobiographical Holocaust narrative following the author, Aranka Siegal, and her family in Hungary as they slowly became consumed by World War II and the anti-Semitism of the invading German army.

The story starts with Piri on her grandmother Babi's farm in Komjaty, a rural region of the Ukraine. Ukrainians and Hungarians were engaged in a civil war, and the border was closed. Piri and Babi had to wait anxious months before Piri could join her family in Beregszasz, Hungary.

Once in Beregszasz, the family dealt with the loss of Piri's uncle, Lajos, and Piri's father, who were both off to war. Poland had been captured by the Germans, and the Germans were pushing toward Hungary. The family tried to engage in their normal routines, including school and celebration of Jewish holidays such as Hanukkah and Passover, but their lives were already being impacted severely by World War II.

Anti-Semitism spread throughout the town, and soon the family had to stay indoors most hours, or dress as peasants around town to avoid suspicion. Piri visited a meeting of the Zionist Club, of which her Aunt Lujza was a member. This club was formed to help Jewish refugees of countries affected by the war. Piri herself, as well as her older sister Iboya, helped smuggle Jewish refugees within the town.

Food shortages became a problem, and food was severely rationed. The family had to rely on smuggled supplies, and they also kept a goat in the house illegally in order to have crucial milk for the youngest children. In a touching scene, housing officials came to the house and forced the family to give up the goat.

The family was most directly impacted when men came and took away sister Lilli, her husband Lajos, and their child Manci from the home, claiming that Lajos had spoken ill of Hungary. Piri's mother made a desperate trip to Poland to try to rescue baby Manci, but she arrived too late, and the child had already been shipped off to a German concentration camp. The three were never heard from again. Meanwhile, Piri's father was captured and held in a Russian prison camp. And Lujza, fearing capture because of her rebel activities, threw herself in front of a passing train.

Piri's mother heroically did everything she could to keep their young family alive. But the Germans eventually invaded the town, and they were carted off to a brick factory converted into a Jewish ghetto. They spent some time in the ghetto, surviving squalid and inhumane living conditions, until they were finally carted off to a concentration camp via train, all while never truly knowing the horror that awaited them. Piri and her sister would escape by being assigned to a munitions factory to work, and the rest of the family was presumed murdered in the Holocaust.

More summaries and resources for teaching or studying Upon the Head of the Goat: A Childhood in Hungary 1939-1944.