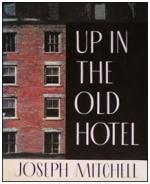 Up in the Old Hotel and Other Stories Summary & Study Guide

Joseph Mitchell (writer)
This Study Guide consists of approximately 27 pages of chapter summaries, quotes, character analysis, themes, and more - everything you need to sharpen your knowledge of Up in the Old Hotel and Other Stories.

Up in the Old Hotel and Other Stories Summary & Study Guide includes comprehensive information and analysis to help you understand the book. This study guide contains the following sections:

This detailed literature summary also contains Topics for Discussion and a Free Quiz on Up in the Old Hotel and Other Stories by Joseph Mitchell (writer).

The book opens with a description of a saloon named "McSorley's." The saloon was probably the oldest in operation in the city at the time of the writing and the author, Joseph Mitchell, described the place and the regular customers in detail. From there, Mitchell moved on to tell the story of a woman named Mazie Gordon, who had spent most of her adult life working in a theater she owned as a ticket taker. But most nights after work, Mazie took some soap and change and went to the streets where she distributed both and checked up on anyone who seemed to be in distress. The stories continued with Joe Gould, who claimed to be able to talk to seagulls and was writing an extensive work he titled "An Oral History of Our Time." A longer story about Gould concluded the book with Mitchell noting that he'd come to remember Gould as something less disreputable than he actually had been, probably because of a tendency to remember the dead with fondness.

Many of Mitchell's stories were set along the water fronts. He considered the pollution to the harbors at some length and presented the opinion of one old bayman who said people always claimed the pollution was lessening but that he believed otherwise. One community Gould visited, Sandy Ground, had been founded on the oyster industry. One of the town's oldest citizen, Mr. Henry, said the people's attitudes had changed for the worse when they were forced into other occupations. Another man Mitchell met, Will Barbee, had inherited a turtle farm from his father who saw a niche market and capitalized on it.

Mitchell was a newspaper and magazine reporter during the 1930s and 1940s. He said that he'd struggled during the Great Depression because he was constantly sent out to get stories of human suffering. Mitchell said that many of those people felt he might be able to help them and that he often didn't have the heart or the nerve to tell them otherwise. It was on an assignment like this that he met James and Elizabeth Holliman, who claimed to have been living in a cave in the park for the previous year. It was obvious that Mrs. Holliman thought Mitchell was with the relief agency. While he didn't have the power to help them in that way, his article garnered attention and they were showered with gifts and food and were given a job.

Mitchell worked on the premise that everyone had a story and he sought to find those stories. Toward that end, he spent days with interesting people, followed them on their jobs and learned the details of their lives.

More summaries and resources for teaching or studying Up in the Old Hotel and Other Stories.

Up in the Old Hotel and Other Stories from BookRags. (c)2022 BookRags, Inc. All rights reserved.