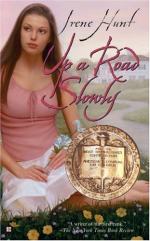 Up a Road Slowly Discussion Questions

Irene Hunt
This Study Guide consists of approximately 38 pages of chapter summaries, quotes, character analysis, themes, and more - everything you need to sharpen your knowledge of Up a Road Slowly.

The author does not delve into some of the negative social issues presented in the book, i.e., Uncle Haskell's alcoholism and Aggie Kilpin's poverty. How would the lives of these characters be different if they had lived in the 21st century instead of the middle of the 20th century?

Discuss how Julie's connections with her extended family would be different if she lived today as opposed to the 1950's.

In what ways has Aunt Cordelia benefited Julie's life and how has she hindered her?

Why does Aunt Cordelia never expect any help from Uncle Haskell although he lives on the same property?

Discuss the emotional impact of first love and the betrayal of that love by someone who has unethical intentions such as Brett's false love for Julie.

Why does Aunt Cordelia press Julie to leave town and attend the state university for her...

More summaries and resources for teaching or studying Up a Road Slowly.

Up a Road Slowly from BookRags. (c)2022 BookRags, Inc. All rights reserved.