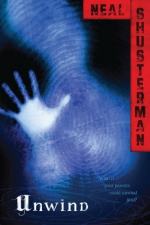 Neal Shusterman
This Study Guide consists of approximately 43 pages of chapter summaries, quotes, character analysis, themes, and more - everything you need to sharpen your knowledge of Unwind.

This detailed literature summary also contains Quotes and a Free Quiz on Unwind by Neal Shusterman.

“Unwind” by Neal Shusterman is the fictional story of life after the Second Civil War which is also known as The Heartland War. The involved three factions include: the Pro-Choice War, the Pro-Life War and what is left of the U.S. Military. The tale obviously takes place in the United States and at a time in the future. During peace talks, the U.S. Military proposes a solution that is designed to satisfy both the Life Army and the Choice Brigade.

The U.S. Military was neutral and served as a buffer between the two warring factions. They proposed the concept of unwinding. It would satisfy the pro-lifers because it does not destroy life on a fundamental basis because every harvested part of an Unwinder had to be used for graphs and transplants. The pro-choice side would be satisfied because unwinding was referred to as retroactive abortion. Parents or legal guardians could decide when their child was thirteen that they basically didn’t want him or her and sign a contract committing their child to the process. If a child escaped unwinding by his or her eighteenth birthday, he could continue his life to its natural conclusion.

Unwinders are looked down upon by society. They are marked for a strange ending to their natural state although the authorities and participating parents or relatives delude themselves to believe that the children still “live on.” There is another category of those scheduled for unwinding. Tithes are “special children” who are selected at birth by their parents for tithing. They look upon the future they’ve chosen for the child as God’s way. Their children have a great purpose in life – serving God by perpetuating life for others. Tithes are taught to embrace the concept and look forward to their thirteenth birthday when they will have the honor of being unwound. The concept was accepted by both sides and legislation was passed resulting in the “The Bill of Life” that laid out the requirements and details of the unwinding process. Unwinding became a popular and accepted process.

Connor Lassiter is the protagonist of the story. He is sixteen and has been signed over for unwinding by his parents. He accidentally finds the signed order and decides to run away. He has reached that rebellious age and his parents apparently are finding him difficult to deal with. It is an out for them but a tragedy for Connor. He wants to live undivided. His journey begins as a quest to save his own life, but on the way to that positive eventuality he meets other kids, Unwinders and Tithes, who are also marked for an ending in this macabre process. Connor is a fighter and after he teams up with Risa, another Unwinder, and Lev, a Tithe, he becomes their leader and eludes the Juvey-cops who are after them and pelting them with bullets from their tranq guns. Connor is able to wrestle a tranq gun from one of the Juvey-cops and shoot him in the leg with it. Connor becomes legendary and known as the Akron-AWOL because of the incident.

Survival and helping each other maintain their current life status is the focus of the runaways who are hunted by the authorities. There is a network of safe houses that has been established for Unwinders, and the main characters have hopes to stay under the radar screen until their eighteenth birthday when they can no longer be unwound.

There are conflicts and shifts of perspective along the way. The main characters wind up in the Graveyard which is an operation in the remote desert of Arizona. The graveyard is run by a former U.S. Navy Admiral who is part of the safe house network. The ominous name refers to the old U.S. military jets that wind up there for stripping or resale. The kids just hope that the name doesn’t apply to their destiny and that they can survive until their age will make them ineligible for being literally and surgically harvested for their parts.

More summaries and resources for teaching or studying Unwind.