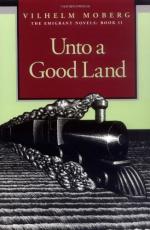 Unto a Good Land a Novel Summary & Study Guide

Vilhelm Moberg
This Study Guide consists of approximately 37 pages of chapter summaries, quotes, character analysis, themes, and more - everything you need to sharpen your knowledge of Unto a Good Land a Novel.

Unto a Good Land a Novel Summary & Study Guide Description

Unto a Good Land a Novel Summary & Study Guide includes comprehensive information and analysis to help you understand the book. This study guide contains the following sections:

This detailed literature summary also contains Topics for Discussion and a Free Quiz on Unto a Good Land a Novel by Vilhelm Moberg.

Karl Oskar Nilson, his wife Kristina and their three children arrive in America as the story opens. The family is from Sweden and Karl Oskar's younger brother, Robert, is also a member of the group. They are traveling with several other families, including Kristina's uncle, Danjel, and his children. He is a widower, his wife having died during the passage. There are several others traveling with the group, including Ulrika who has a bad reputation in their home village in Sweden, and Ulrika's illegitimate daughter. Ulrika steps in to help Danjel with his children after his wife's death and Kristina is the first to realize that they must accept Ulrika and her effort to make a new life for herself in America. Kristina and Ulrika become close during the trip and it is Ulrika who helps Kristina during the birth of her son, the first of the group born in America.

The group arrives in America and begins the trip overland to Minnesota. They choose this destination because it is the home of the son of a member of the group. They travel by rail and by steam boat. The train makes most of the group nervous but Ulrika loves it. The steam boat takes them up the Mississippi River and they have to walk the final thirty miles to the small settlement of Taylor Falls. There they discover that the son, Anders Mansson, is living in a tiny house that is little more than a hovel and that he has cleared little land in the time he has been there.

The men of the group choose their homes near Taylor Falls but Karl Oskar goes several miles farther from the settlement, choosing to homestead near a lake that has previously been unsettled by white people. Karl Oskar is a hardworking man and takes his responsibilities toward his family very seriously. He believes that he can overcome any obstacle by hard work. He worries over every decision, including when to use the precious nails he manages to buy with his last few dollars. Karl spends the entire winter building tools and furniture and preparing for the spring planting. The winter becomes difficult with the family depending on game from the nearby forests and fish from the lake as their main staples. At one point, the family runs out of flour for bread. With little to eat other than game and fish, the bread is necessary for the family's well-being. Karl Oskar walks the miles into town and almost dies in the cold of the night.

Kristina, while supporting her husband's decision to make a new life for the family, is homesick. Karl Oskar realizes she is sad but does not figure out the extent of her homesickness for some time. He tries to console her by promising that their lives will be better but it takes time before Kristina is able to work through the depths of her sadness. Even then, she still misses her family and her former home and cannot help referring to Sweden as "home."

More summaries and resources for teaching or studying Unto a Good Land a Novel.

Unto a Good Land a Novel from BookRags. (c)2022 BookRags, Inc. All rights reserved.