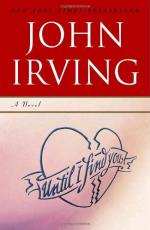 Until I Find You: A Novel Summary & Study Guide

John Irving
This Study Guide consists of approximately 36 pages of chapter summaries, quotes, character analysis, themes, and more - everything you need to sharpen your knowledge of Until I Find You.

Until I Find You: A Novel Summary & Study Guide Description

Until I Find You: A Novel Summary & Study Guide includes comprehensive information and analysis to help you understand the book. This study guide contains the following sections:

This detailed literature summary also contains Topics for Discussion on Until I Find You: A Novel by John Irving.

Until I Find You is a novel about an actor named Jack Burns who is told as a young boy that his father abandoned him and his mother, but is reunited with his father as an adult when he learns his mother had not told him the entire truth.

The story begins in the 1960s as four-year-old Jack Burns and his mother leave Canada to travel through Northern Europe, supposedly looking for Jack's father, William Burns, who works as a church organist. Jack's mother is a respected tattoo artist who goes by the professional name Daughter Alice. Alice finds work in Amsterdam, Helsinki and Oslo as she leads Jack in search of his father who seems to move from place to place in search of grand church organs to play, usually leaving a trail of heart-broken women in his wake.

They seem to lose the trail in Amsterdam and Jack and his mother return to Toronto, where Jack is sent to a private school, then off to a boarding school in Maine. Meanwhile his mother becomes the lover of a wealthy divorcee named Leslie Oastler, who has a daughter named Emma. Although much older than Jack, Emma introduces him to sexual activity, which both arouses and confuses him. He is further confused when he is sexually abused by an adult woman at a young age.

Jack discovers a talent for acting while in school and works as an actor after college. He follows Emma Oastler to Hollywood, where she works reading screenplays and is writing a novel. Emma's first novel is a bestseller, as is her second novel. Jack turns his talent for playing women into a successful acting career. When Emma dies suddenly, she leaves a screenplay of her first novel for Jack, instructing him to modify it and present it as his own work. This he does, winning an Oscar award for his screenplay.

After the death of his mother in Toronto, Jack begins to learn more about his childhood. He returns to Northern Europe and retraces his journey as a boy. He is shocked to learn that his mother had not been chasing his father, but that his father had been chasing them. His mother had used Jack as bait to convince William to return to her and had sabotaged William's attempts to form new relationships. He discovers he has a half-sister living in Scotland, and his sister sends him to see their father, who is living in a facility in Switzerland. Jack learns that his father had been following his life very closely, even as a young boy.

More summaries and resources for teaching or studying Until I Find You: A Novel.

Until I Find You: A Novel from BookRags. (c)2022 BookRags, Inc. All rights reserved.