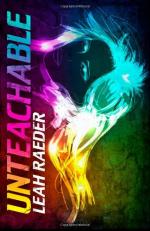 In Chapter 10, Maise spends her lunches filling out college applications in the library. Hiyam asks her if she wants to hang out after school. She laughs in her face. She sees Wesley in the halls, but the two don’t talk. Hiyam pushes Maise for larger and larger quantities of cocaine, but Maise doesn’t want to get charged with intent to deliver if she is caught. Plus, Rivero doesn’t trust her with that much drug. Because Evan is no longer around, Maise figures she doesn’t have to deal to shut Hiyam up, but she never got a job from the applications she and Wesley filled out. She figures maybe she should just accept her role in life.

One Saturday she finds Wesley sitting in her living room. Her mother says he wants to apologize then prepares to listen as the...