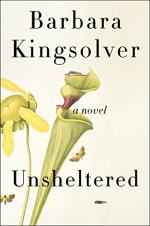 Barbara Kingsolver
This Study Guide consists of approximately 40 pages of chapter summaries, quotes, character analysis, themes, and more - everything you need to sharpen your knowledge of Unsheltered.

This detailed literature summary also contains Quotes and a Free Quiz on Unsheltered by Barbara Kingsolver.

The following version of this book was used to create this study guide: Kingsolver, Barbara. Unsheltered. New York: HarperCollins, 2018.

The novel alternates between the twenty-first and nineteenth century stories, using the last words of one chapter as the title of the next one. In the twenty-first century story, Willa imagines saving her home, while in the nineteenth century, Thatcher dreams of delving deeper into his education. The novel begins with Willa Knox receiving the unfortunate news that her house is damaged enough following Hurricane Sandy that the simplest option would be to demolish it. She and her husband, Iano, have both lost their jobs and relocated from Virginia so Iano can take a teaching job nearby. The pair have been immersed in the academic world since meeting, and their frequent chasing of their academic dreams often led to the ire of their two children.

In addition to the crumbling house foundations which lead Willa to stress out, the couple is also taking care of Iano's father, Nick, a Greek immigrant who frequently expresses his racist beliefs and requires expensive medical treatments. Although Nick is quickly approaching the end of his life, Willa and Iano resist thinking about the next steps and the heavy financial burden that his medical treatments and eventual funeral will impose. Towards the middle of the novel, Nick passes away, and it is only after he dies that Willa begins to see the similarities between her beloved husband and his father whom she struggled to connect with in life. His deteriorating health also serves as a method to showcase the caring nature inherent in Tig, Willa and Iano's passionate daughter.

The main conflict within Kingsolver's present-day sections center around Willa and Iano's son, Zeke, and his abrupt entrance into single fatherhood after the suicide of his girlfriend, Helene. The pair had lived in Boston with their newborn son, Aldus, and the news comes as a complete shock. Zeke struggles to adjust to the new reality of living alone with a baby. When Willa travels to Boston to plan Helene's funeral, she attempts to pull her son back together, but the realization that he must proceed through the healing process on his own schedule puts another layer of strain on the family. She brings both Zeke and the baby back to Vineland in an attempt to allow him a chance to bond with his son. However, Zeke struggles to establish a meaningful connection with his son, nicknamed Dusty by his grandparents. The conflict between Zeke and Tig sets the stage for another layer of familial disappointment that Willa experiences: that her two children cannot find it in their hearts to pull together during trying times. As their story progresses, Tig takes custody of Dusty and begins to mature in her parents' eyes, while Zeke demonstrates his inability to truly grow up. The entire family represents American tragedy as their lives crumble around them, paralleling the decay of their home.

Kingsolver introduces a second set of characters who live in the same Vineland community as Willa and her family, but back in the 1870s, a decade after Vineland was founded as a utopian community. Thatcher Greenwood is a schoolteacher whose house is also decaying, but facing persecution for his radical ideas about evolution and science. Greenwood begins to build a friendship with his neighbor, Mary Treat, who shows Thatcher much about the natural world, teaching from her scientific background. Thatcher struggles with staying true to his convictions to teach while also experiencing conflict in his marriage. His wife, Rose, eventually asks him for a divorce, and Thatcher leans on Mary for companionship. He ends his section of the novel by choosing to undertake a western expedition for research.

More summaries and resources for teaching or studying Unsheltered.