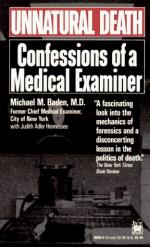 This detailed literature summary also contains Topics for Discussion and a Free Quiz on Unnatural Death: Confessions of a Medical Examiner by Michael Baden.

In this biography Michael Baden explains the ends and out of a medical examiner. Baden gives the history of ME's dating back to the 1100s when a coroner was not much more than a tax collector. His duties were to investigate suspicious deaths to make sure they were not suicides; if they were, any money would go to the king instead of the deceased person's family members. Baden describes how over time the need to understand how, why, where and when a person died helped the office of coroner to evolve into what is now known as a medical examiner. Even to this day the law varies from state to state on whether or not there is trained medical examiner or coroner in office.

Baden delves into some of his more famous cases such as John Belushi, Elvis Presley, and John F. Kennedy to explicate the need for the ME's office not only in determining the cause of death but also the time of death. The answers to these questions allow for an understanding of who is responsible for the crimes. In the JFK case, Baden talks about how the mishandling of evidence and the autopsy early on led to conspiracy talk for years to come. With all three of the cases, the public is so star struck by the men that they cannot accept the simple facts of the case; they want to believe that something more sinister happened to cause their deaths. In the John Belushi case, time of death is very important because the only person to see him before he died claimed that he must have given himself the lethal injection after she left. Baden and his team are able to prove that she was in fact the one to give Belushi the lethal dose. In Elvis's case, Baden gives an unexpected new theory, that he does not necessarily believe that drugs were what killed Elvis. Baden believes that Elvis's already bad heart was the cause of death.

Baden looks at cases involving multiple murders and why they kill. People do not usually kill for no reason at all, and a good medical examiner can look at all the information and tie all the pieces together to solve some of the cases. He shows how if the ME is doing his job correctly, the wrong person is not blamed for the crime. Baden shows how important the job of a medical examiner is in this day and age. Throughout all the many cases Baden discusses in this biography, he is always showing how the answers are always there if the ME takes the time to look. It just takes an ME who is willing to look for the truth no matter where it takes him.