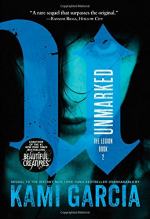 This detailed literature summary also contains Quotes and a Free Quiz on Unmarked by Kami Garcia.

Unmarked, by Kami Garcia, is the second book in the acclaimed teen fiction series, Legion of the Black Dove. The novel begins with Kennedy observing Jared as he’s shackled in a cell. She tells him that she is scared that she’s going to have to kill him because Andras has possessed him.

In a flashback that lasts throughout the book, the reader is taken to a week prior to Jared's possession. Kennedy is in Winterhaven, a prep school. She is having a nightmare and wakes, not quite knowing where she is. Then, it sinks in that she is at Winterhaven. She recounts the series of events that landed her there. She was found by the authorities who brought her to the hospital where her aunt then announced that she was sending her to Winterhaven. Kennedy has not settled into life at the school. She is introverted and uninterested in making any friends. She surfs the web for any information she can find on what Andras is doing around the world as she puts the pages up on a wall in her room.

A few days later Jared arrives at Winterhaven to take Kennedy with him to meet up with the rest of the group. Kennedy initially refuses because she feels that she has no place in the group now that they know she is not one of the Legion. Kennedy had an aunt, Faith Madigan Waters, whom she never knew about, who is the fifth member. Jared convinces her to come along. In the process, he tells Kennedy that her mother was never part of the Legion. The two leave and they meet up with the rest of the group, including Elle, Kennedy’s best friend.

Elle tells Kennedy that she is tagging along with the group, and everyone goes to figure out Faith's whereabouts. The group stops at a truck stop. While they are getting food, Lukas asks for Kennedy to remember things about her father in hopes that she will pull up a memory that can be used to locate Faith. Kennedy is unwilling to talk about her father and leaves the restaurant. It is only after Jared consoles her that she goes back in and tries to think of a memory. Kennedy eventually recalls a memory of a picture of her and her father when they visited a place called Topsfield Museum. They all go to the museum, and Priest easily picks the lock. Alara lets the rest of the group go in while she hangs back to talk on the phone with someone.

Inside the museum the group comes across old objects that supposedly belonged to Paul Revere, John Hancock, and Joseph Warren. Kennedy finds an Edgar Allen Poe poem that has a line written incorrectly. The person who dedicated it was named Ramona Kennedy, the name Kennedy’s father picked out for her. Kennedy realizes this poem is a clue left for her. Alara, who has joined them, smashes the case, pulling the piece of paper out to reveal a map.

Following the map, the group is led to a house out in the forest surrounded by salt lines and filled with wind chimes. As everyone is heading to the house, they find a grave with Faith’s name on it. However, before they get to the house, a Doberman stops the group in their tracks. A woman comes out on the porch with a shotgun. She lowers it when she sees Kennedy. The woman is Faith.

Faith reveals that with all five members together they can erect a barrier to keep Andras from hurting them. She also tells the group that the Illuminati are still around. Unknown to the group, Elle had stolen a cuff from the museum that had a spirit attached to it. The spirit manifests inside the house and begins to attack everyone. Faith and Bear, the dog, are able to dispatch the spirit.

Later, Kennedy asks Faith why she disappeared, and Faith tells her about the Illuminati spy, Archer, who betrayed her trust and made it necessary for her to go into hiding. After everyone has gone to bed, Kennedy gets up again to talk to Faith. Faith is dead.

Devastated, Kennedy wakes everyone up. The next morning they bury Faith. After the burial, the group is surrounded and attacked by a horde of possessed people from the nearby town. They barely escape from Faith’s house. While in the car, Kennedy pulls out a note that Faith had left for her. It’s a riddle about an object Faith hid in Boston in the Granary Burying Ground. They go to the cemetery and find Paul Revere’s grave, a supposed Illuminati member, and then his family's graves. They realize that Faith hid something in a cornerstone. With the cornerstone finally opened, Kennedy pulls out Faith’s journal. Everyone believes that Kennedy is now the newest member of the Legion.

The group overhears that a priest died in an old church less than 10 miles from the group's present location. They head to the area, and Kennedy manages to pick Andras’ host out of the crowd. He makes eye contact with Kennedy before he starts jumping from host to host, leading the group with him to an abandoned Wharf. The group confronts Andras, and he ends up manifesting Alara’s worst fear. He kills her little sister in front of her. Everyone then realizes that it isn't real and that Andras only conjured up an illusion. Andras is ready to attack the group when two men, Dimitri and Gabriel, show up.They subdue Andras with Gabriel’s whip, Azazel, and talk with the group. Dimitri tells Kennedy that she is one of the Illuminati because her mother was an Illuminati. The information makes Kennedy reel.

Everyone transports Andras to the Illuminati safe house. As they are putting Andras into the sanctuary, a holding cell for Andras, the demon possesses Jared. Dimitri and Gabriel lock Jared in the cell. When they suggest killing Jared, Kennedy defends Jared. The men promise to bring no harm to Jared and Kennedy, and the others are left trying to figure out what to do. Kennedy talks with Gabriel and follows him down to Jared’s cell. Andras taunts Gabriel while they are down there and brings up an illusion of Elizabeth, Kennedy's mother, to unnerve Gabriel. Gabriel is so enraged that he almost opens Andras’ cell, but Kennedy gets in the way to block him.

She and Gabriel leave the cell but not before Andras reveals that the first letters of all of his victims' first names spell out Kennedy’s full name. Kennedy is appalled and worries about what that could mean. Kennedy goes off on her own and ends up in the Athenaeum where she talks with Dimitri. He tells her about the history of the Illuminati and that Chris Beren, the artist, was part of the Illuminati. That is why his painting, "The Lost Painting," is there in the Athenaeum.

Dimitri leaves Kennedy to her thoughts and Faith's journal. She reads about the Shift and decides that looking for it again might be a good idea because it might save Jared. She shares what she knows with everyone and they devise a plan to slip out of the safe house without Gabriel or Dimitri knowing. Kennedy and Alara pretend to have their menstrual cycle and when Gabriel takes them to the store for products, Alara escapes out the back with her boyfriend, Anthony. Alara and Anthony go to Moundsville to look for the Shift. Kennedy stays behind, and she and Gabriel return to the safe house.

Gabriel and Dimitri lecture everyone about such foolish ventures. Then, they both leave to retrieve Alara. Alara returns on her own without the Shift. Kennedy begins to lose hope of returning Jared to himself. To distract herself and to see if there might be answers in the journal, Kennedy reads where Faith predicts that Kennedy would be the "white dove." The white dove supposedly would be a person who would heal everyone and bring balance back to the world. Kennedy discounts that and joins the rest of the group in front of Jared’s cell. Jared is only conscious for a few minutes. Then, Andras takes over and reveals Jared’s secret to Alara and Priest. He tells them that he was the one who revealed the names and killed the previous Legionnaires. Afterwards, Andras tells Kennedy that he marked her soul and that is how he found her so easily.

Kennedy goes to talk with Priest, but Priest is upset with what he has learned and is unwilling to talk with her. Later on that night everyone heads back down to Jared’s cell to check on him. When they get there they see a demon trying to free Andras. This demon looks a lot like Kennedy. Gabriel turns the demon to dust. Shockingly, a man named Alex shows up with the holy book, Diario de Demoni. This weakens Andras. Kennedy and the rest watch as Alex talks with Gabriel and Dimitri. From their dialogue, Kennedy is able to figure out that Gabriel is Archer, the Illuminati spy that hurt Faith in the past. Alex agrees to help everyone put Andras back in hell and then talks with Kennedy alone. Alex reveals that he is Kennedy's father. He tells her that he did not want to leave her and her mother. He had to leave them. Kennedy hears him, but the problem is that Kennedy still isn’t ready to forgive him, even when he shows her pictures he took over the course of her childhood to show that he had kept tabs on her and had not totally abandoned her.

They rejoin the group who are talking about what to do with Andras as he is getting stronger. Priest suggests that they build a collar from Azazel, the whip, to keep him in a constant state of weakness. Alara tells everyone of a poison she can make to hopefully paralyze Andras so they can get the collar on him.

Gabriel and Priest start rearranging Azazel while Alara gets the poison. Down in the cell everyone gets to work as Gabriel goes into the cell to put the collar on Andras. Afterwards the group splits up to go and track down Bastiel with Priest. After they leave, Kennedy and Lukas talk. Lukas lets it slip that he knew what Jared had been doing, making the list of names that eventually led to everyone's deaths. He confesses that he knew about it, yet he did nothing. He hoped to make his brother look bad in front of their father. Kennedy tells him that he needs to help her save his brother.