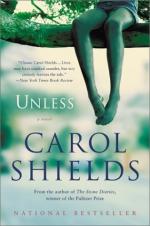 Unless Summary & Study Guide includes comprehensive information and analysis to help you understand the book. This study guide contains the following sections:

This detailed literature summary also contains Topics for Discussion and a Free Quiz on Unless by Carol Shields.

Unless is written in the first person, and thus the reader becomes intensely involved in the thoughts and feelings of the author's alter ego, Reta Winter. Like Carol Shields, Reta is a successful writer. She is forty-three years old and lives near Orangetown, Ontario. Although not legally married to her common-law husband, a family doctor named Tom, they have been together in a monogamous twenty-six-year relationship. Tom and Reta have three daughters: Norah, Christine, and Natalie. They enjoy a comfortable upper-middle class lifestyle in the beautiful rural countryside north of Toronto.

The story begins in June 2000. The timing of the novel is important, since it represents not only a new century, but a new life after a detour into grief. Her oldest daughter, Norah, has left behind her family, her boyfriend, and her university studies in order to discover the nature of goodness. Her journey of discovery leads her to renounce everything that is safe and ordinary. Norah has chosen to sit day after day, rain, snow, or shine, on a street corner in Toronto with a begging bowl in her lap. She maintains complete silence, communicating only with a cardboard sign around her neck which states in bold letters, GOODNESS. Reta is desperately trying to maintain an ordinary life in the face of grief and crisis.

On the surface, the novel appears to be an account of an ordinary Canadian family trying to come to terms with a daughter's decision to run away from home to live an apparently unproductive and dangerous life. Reta begins the story of her unhappiness with the question of how to deal with life's grief and losses. She speaks about the fragility of happiness, its elusive qualities, and the emotional cost of keeping that happiness vital and current within an ordinary life. She concludes that she must focus on her blessings, and it immediately becomes clear that her writing is crucial to her sense of self and her sense of happiness.

The story of the Winters family and their bewildered grief when Norah disappears is told entirely though the confused perspective of Reta. The reader journeys through a narrative more akin to a stream-of -consciousness process than a definitive story about the family. Reta is far too preoccupied with herself to permit the reader a clear picture of the events which pop up now and again in relation to Norah's disappearance. Words chase themselves round and round her brain, one moment agreeing, the next in complete contradiction. The events that occur in this year of her life and her concurrent thoughts frequently fail to be synchronized into a discernable pattern of cause and effect.

As a result of this style of narration, the book is a series of apparently unconnected events, circling above the actual lives of Reta and her family, now and then touching base with the real world, but quickly taking flight as Reta's inner dialogue wanders from one speculative thought to another. For Reta, reality does not appear to be a solid and real entity, but one that fluid and process-driven. She attempts to solve her grief by indulging in an open-ended dialogue with herself which is at once complex and ambiguous. Divergent impulses constantly rise to the surface. Psychologically isolated from Tom, her daughters, her mother-in-law, and her friends, she attempts to find her way through a chaotic, grief-stricken world back to normalcy.

Unless from BookRags. (c)2022 BookRags, Inc. All rights reserved.