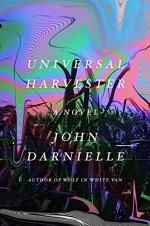 Darnielle, John
This Study Guide consists of approximately 75 pages of chapter summaries, quotes, character analysis, themes, and more - everything you need to sharpen your knowledge of Universal Harvester.

The following version of this book was used to create this Study Guide: Findley, Ally. Universal Harvester. Farrar, Straus, and Giroux, 2017. First edition.

In John Darnielle's sophomore novel, Universal Harvester, he explores the quiet Midwestern town of Nevada, Iowa. The story opens with the perspective of Jeremy Heldt, a 22-year old who works at the local Video Hut. He is at a crossroads in his life: he finished high school a few years back and has been working at this job for about six years. He has been contemplating going back to school, attending the local community college. His father suggests some work in construction which could offer him steady full-time work and perhaps a career he can retire from. Jeremy lives with his father, and the two of them still mourn the loss of Jeremy's mother, who died in a car accident six years ago.

One day, while Jeremy is working at the Video Hut, a customer brings in a tape of the movie Targets and says that there is something on the tape that should not be there. At first, Jeremy is not all that concerned, but a few days later, another customer arrives and says the same thing about a copy of She's All That. Jeremy investigates, watching the tapes in question, and finds bizarre footage of people in a shed with sacks over their heads. He brings this to the attention of his boss, unsure if it is simply a home movie or actually something which should elicit concern. Jeremy's boss at Video Hut, Sarah Jane, puts off watching the tapes, but when she eventually does, she is alarmed to discover she recognizes the house in the footage. It is of Collins, Iowa. She drives out there to investigate and is implicated into the life and projects of Lisa Sample, the woman who lives in the house and, it is determined, has been making the films. Jeremy begins to be concerned. One day, he drives out to the house to inform Sarah Jane that he is planning to take on another job. On his way, he sees Ezra, his fellow employee at the Video Hut, on the side of the road, having wrecked his car going to deliver tapes to Sarah Jane.

At this point, the narration switches to a flashback, delving into the childhood of Lisa Sample, examining the lives of her parents as well as her early life. We discover that in her childhood, Lisa's mother, Irene, moved from home for her marriage to Lisa's father. This move, among other things, put a strain on Irene, who turned to church for reassurance. After a chance meeting with a homeless man who provided her with a tract from his church, and again with an unkempt woman outside a movie theater who provided her with the same tract, Irene began to attend the church of Michael Christopher. It quickly becomes clear to the reader during this flashback that Michael Christopher's church was not a normal church, but was, in fact, likely a cult. Around Christmas, when Lisa was about five years old, Irene disappeared, leaving only a short, cryptic note.

Then, the narration switches back to Jeremy's story line. He is still in shock, having witnessed the scene of Ezra's accident. Ezra is safely put on an ambulance, and Jeremy goes to see Sarah Jane at the Collins house, less with the purpose to tell her about his new job as to inform her about what happened to Ezra. Sarah Jane acts strangely, and they go to pick up the tapes which are littered on the roadside because of the accident. Jeremy returns home, but the incident bothers him so much that he and his friend Stephanie, who initially brought the footage on the tapes to his attention, go back to the house to confront Sarah Jane and Lisa.

The final section of the book brings an entirely new cast of characters, telling the remainder of Jeremy's story retroactively. The Pratt family, originally from California, go out to Collins, Iowa. Ed and Emily Pratt, the parents in this family, are newly retired and travel the country in an RV before deciding to settle in rural Iowa. Coincidentally, they buy the same house that Lisa used to own, and where she made the mysterious tapes. Ed and Emily's children, James and Abby who are both in college, come to visit, and their son, James, finds the old tapes. They watch them in the basement and come across one where Jeremy is being interrogated by Lisa, presumably after he and Stephanie arrived at her house at the end of the previous section. Concerned, James tracks down Jeremy's father, Steve, who confirms that Jeremy is fine, living in Des Moines and enjoying success in his new career. He gives James Jeremy's email address. James emails Jeremy asking about Lisa Sample and her tapes. Jeremy tells him to stop digging and to leave Lisa alone, but regardless, provides James with Lisa's new address. The family goes together to Lisa's new house. They see her waving from an upstairs window. They pull into her driveway and, thinking better of it, turn around.

More summaries and resources for teaching or studying Universal Harvester.