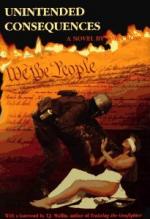 John Ross (author)
This Study Guide consists of approximately 32 pages of chapter summaries, quotes, character analysis, themes, and more - everything you need to sharpen your knowledge of Unintended Consequences.

This detailed literature summary also contains Topics for Discussion and a Free Quiz on Unintended Consequences by John Ross (author).

Gun enthusiasts and strong 2nd Amendment advocates will enjoy Unintended Consequences because it supports their beliefs, principles, and political views. John Ross, through the character of Henry Bowman, has pushed the agenda that all Americans have the basic right to own any type of gun, ammunition, or other firing device in existence and that the federal government has grossly overstepped its boundaries in placing restrictions upon such ownership.

Henry Bowman is the son of a World War II pilot trainer who is both a gun and flight enthusiast. Fascinated with guns at a very early age, the agile and coordinated Henry grows into adulthood owning and building increasingly sophisticated guns and ammunition. By the time he graduates from college with a degree in geology, Henry's father has died and he is increasingly wealthy, which allows him to pursue weaponry as a top priority. Unfortunately, his mother dies early as well and Henry experiences significant traumas, including the murder of rapists he discovers in the woods and then his own rape at the hands of some drunk men. Emerging from these traumas through the positive action of teaching self-defense courses, Henry delves into a world of abused women, eventually developing an occasionally sexual but definitely pro-gun relationship with Cindy Caswell. His other close collaborators are attorney Ray Johnson and fellow gun enthusiast Allen Kane, both of whom share Henry's deepening anger with the activities of the ATF or the Alcohol, Firearms and Tobacco Agency and its ability to fine, imprison, and even kill with impunity.

Ultimately, Henry and friends take the ultimate action of killing ATF agents who are planning raids on Allen's and Henry's homes and encouraging others to do likewise, via the Internet. A wholesale revolt begins to occur, against the ATF, the FAA, the EPA, and state and national politicians who have supported what the gun culture believes to be unconstitutional restrictions. Ultimately, the President capitulates, promising investigations and amnesty for all who have participated in the murders in exchange for an end to the violence. The reader is left to wonder who has really won this "war." While Henry and his followers have certainly emerged triumphant and unscathed, they have engaged in the same activities as their "enemies" of murdering men, women, and even children in the name of their cause, violating laws and other basic freedoms guaranteed by the Constitution. Worse, they appear to do so without emotion or guilt and emerge as chilling examples of a political group run a muck.