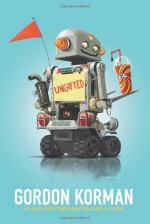 Gordon Korman
This Study Guide consists of approximately 49 pages of chapter summaries, quotes, character analysis, themes, and more - everything you need to sharpen your knowledge of Ungifted.

This detailed literature summary also contains Quotes and a Free Quiz on Ungifted by Gordon Korman.

In "Ungifted", a so-called "average" student faces unexpected consequences after an impulsive choice accidentally causes some serious damage to his school's gymnasium. As Donovan Curtis struggles to keep several important secrets, he finds himself making unexpected friends and learning surprising truths about himself and people he once had little time for. As the narrative explores thematic questions about the value of following impulses, it also explores issues around the different interpretations of the word / concept "gifted".

By his own admission, teenager Donovan Curtis is impulsive. Once an idea or a desire for action hits him, he says, he is unable to control it, or to consider the consequences. It’s only in the aftermath of his actions, when things start happening that he didn’t expect, that he comes to understand that following his impulse might not have been the best possible choice.

This is exactly what happens in the opening chapter of “Ungifted”. Donovan whacks a statue outside of his school with an old tree branch, causing part of the statue (a globe) to fall off, roll towards the school, crash through the gymnasium doors, and seriously disrupt a major sporting event.

In the aftermath of the incident, a chain of circumstances sees Donovan not receive punishment for his actions, but instead end up at the Academy for Scholastic Distinction, in a classroom of above-average students that he and his buddies used to call geeks, dweebs, nerds, or brainiacs. Realizing that staying in this class is his one sure way of avoiding the consequences of causing the destruction at the school, Donovan does his best to fit in, even though he’s clearly not as intellectually “gifted” as the other students in his class. Those students, for the most part, give him a very tentative welcome, although two of them (Noah and Chloe) become more interested in him when they see how “normal” he is, normal being something they’ve NEVER been. Meanwhile, the rest of the class becomes friendlier, albeit grudgingly (in some cases), when he helps them improve the robot they are building as an entry in a regional robotics competition.

As Donovan ingratiates himself more deeply with his classmates, teachers at the Academy become increasingly suspicious about how he came to be there. At the same time, the Superintendent of Schools is searching for the boy responsible for the gym accident, and Donovan’s pregnant sister Katie gets closer and closer to her due date. Eventually, Donovan is forced to take one of the school’s admission tests. He anticipates failing quite badly, but is shocked and surprised to discover that someone (one of his classmates?) has hacked into the school’s computer system and is answering the exam questions for him! He passes and remains at the school – until, that is, an incident at a school dance leads him to being recognized by the Superintendent and being taken out of the Academy.

Back at his old school, Donovan realizes how much he misses both his new friends and the robot they’d been working on, particularly as the date for the robotics competition gets closer. His friends at his old school see how upset he is, and conspire with Katie (now very close to delivering her baby) to take him to the meet. While there, Donovan once again gives in to an impulse and engages “his” robot in conflict with a competing robot, resulting in both robots / schools being disqualified from the competition.

It is at precisely that moment that Katie realizes her baby is coming. She is rushed to the hospital, gives birth safely, and names the baby girl after the robot built by Donovan and his academy classmates. Everything goes back to normal – or close to normal: Donovan continues to attend his old school, but is allowed to continue participating in the Academy’s robotics club.

More summaries and resources for teaching or studying Ungifted.