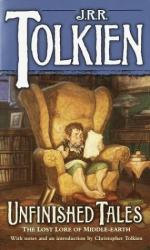 Plot Summary
+Chapters Summary and Analysis
Chapter 1, Of Tuor and His Coming to Gondolin
Chapter 2, Narn I Hin Hurin
Chapter 3, A Description of the Island of Numenor
Chapter 4, Aldarion and Erendis
Chapter 5, The Line of Elros: Kings of Numenor
Chapter 6, The History of Galadriel and Celeborn and of Amroth King of Lorien
Chapter 7, The Disaster of the Gladden Fields
Chapter 8, Cirion and Eorl and the Friendship of Gondor and Rohan
Chapter 9, The Quest of Erebor
Chapter 10, The Hunt for the Ring
Chapter 11, The Battles of the Fords of Isen
Chapter 12, The Druedain
Chapter 13, The Istari
Chapter 14, The Palantiri
Characters
Objects/Places
Themes
Style
Quotes
Topics for Discussion
Order our Unfinished Tales: The Lost Lore of Middle-earth Study Guide

J. R. R. Tolkien
This Study Guide consists of approximately 47 pages of chapter summaries, quotes, character analysis, themes, and more - everything you need to sharpen your knowledge of Unfinished Tales.

The author's finished and published novels have been wildly popular. His death saddened and disappointed his fans. Their demand for more of his work, particularly more tales about Middle-earth (the setting for Lord of the Rings and The Hobbit),led his son, Christopher Tolkien, to look through his father's unpublished writings to see if he could discover more about what the author had intended to write on the subject. Fortunately, the author had a habit of keeping his unpublished writings.

The result of Christopher Tolkien's investigation was many scraps of stories and nearly completed tales that used Middle-earth as the setting. Many of these tales feature characters that Tolkien's fans are already familiar with from Lord of the Rings and The Hobbit. Although the stories are unfinished, imperfect, and in many places conflicting, they still give fans a lot of extra information about the characters and places in and around Middle-earth. For this reason, Christopher Tolkien decided to clean them up as well as he could, assemble them, and have them published as a collection of unfinished short stories.

The stories are unfinished and, at times, conflicting, so they need a lot of explanation. Christopher Tolkien, acting as the editor, attempts to explain and resolve the conflicts. In addition, he offers ideas to fill in the unfinished parts of the stories. He always backs these ideas with an explanation of where he drew the ideas from, such as connections from the author's other writings or notes that the author scribbled on scraps of paper.

The stories were never intended by the author to be published as a collection, but were rather pushed together by the editor (his son). For this reason, they lack an overall cohesiveness. Nevertheless, the editor manages to give them some unity by putting them more or less in chronological order. In this way, the tales fall into the three ages of Middle-earth.

In the first age, the reader meets in two separate tales Tuor, Turin, and their kin. The first story is about the life of Tuor, who is destined to be a great leader living in a beautiful elven city. Turin's tale, however, is much more tragic. His family is cursed by Morgoth, who eventually subjects them to a fate worse than death.

The tales from the second age tell about the island and people of Numenor (which is near Middle-earth) and, to a lesser extent, about Galadriel, the powerful and wise elf (familiar from Lord of the Rings), her husband Celeborn, and Amroth (King of Lorien, who has been described in one place as being the child of Galadriel and Celeborn). One chapter goes into detail telling the story of Aldarion and Erendis, one-time King and Queen of Numenor, and how they fall in love but are destined to be unhappy together because he loves the sea and goes away for many years at a time, while she doesn't like to travel at sea.

More summaries and resources for teaching or studying Unfinished Tales: The Lost Lore of Middle-earth.