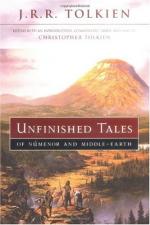 J. R. R. Tolkien
This Study Guide consists of approximately 73 pages of chapter summaries, quotes, character analysis, themes, and more - everything you need to sharpen your knowledge of Unfinished Tales of Numenor and Middle-earth.

This detailed literature summary also contains Topics for Discussion and a Free Quiz on Unfinished Tales of Numenor and Middle-earth by J. R. R. Tolkien.

The Unfinished Tales of Numenor and Middle Earth are a collection of unfinished works put together by J.R.R. Tolkien's son, Christopher Tolkien. The tales are all in various stages of completion, and each stands alone as its own story. Christopher Tolkien does very little editing of the tales, but instead presents them to the reader in exactly the form that they exist in his father's notes. The few places where editing does take place is mainly due to their being conflicting versions of the story, and these are clearly marked for the reader so as to avoid confusion.

As the reader makes their way through the tales, they find that the book is divided into four distinct sections. The first three sections are each dedicated to a specific age or time period that Tolkien created. In essence, it is something of a historical timeline that gives the reader supplemental information to what is found in other works. The fourth section is simply titled Part Four and contains specific tales that do not pertain to the other three sections but do offer insight into the world of Middle Earth.

In the First Age, we are introduced to Tuor and Turin, both of the House of Hador. Though these cousins never actually meet, their lives and destinies are intertwined. These tales also give the reader their first taste of just exactly how the format of the book reads. For example, Tuor's tale cuts off just as the reader falls into its rhythm. The Second Age takes us to the land of Numenor and visits the history and people of the isle. In "A Description of the Island of Numenor," the reader is given a detailed accounting of the geography of the land. "Aldarion and Erendis: The Mariner's Wife," tells the tale of Tar Aldarion's longing for the sea and the consequences of following his heart. "The Line of Elros: King of Numenor," is a detailed timeline of the genealogy of Numenor, giving the reader a timeline against which other events can be compared. The final tale in this section takes the reader back to Middle Earth to learn about Galadriel and Celeborn. This is tale brings forth just as many questions as it answers with its variations and inconsistencies.

Part Three takes the reader deep into the Third Age. The tales contained in this section give history and insight around the events and times seen within the Lord of The Rings trilogy. First the reader is given a look into what exactly happened to Isildur in "The Disaster of the Gladden Fields." Then we are given a deeper understanding of the events that lead to the alliance between Rohan and Gondor in the tale of "Cirion and Eorl and the Friendship Between Gondor and Rohan." The next two tales deal with the Ring of Power. The reader is given a glimpse into Gandalf's strategy and motivation in "The Quest of Erebor," while "The Hunt for the Ring," shows a rare look into the mind of Saruon himself. These tales open up new information about the search for the Ring of Power that the reader is not privileged to anywhere else. "The Battles of the Fords of Isen," is a look into the death of Theodred, this event is mentioned in the Lord of the Rings, but never truly explained.

Part Four of this anthology is slightly different from the other three sections as it deals with specific races and objects rather than a time period. In Part Four, the reader is first introduced to a small yet hardy race of beings known as the Druedain. Though their descriptions make them seem similar to Hobbits, the Druedain are much more closely akin to Dwarfs. In "The Istari," the reader is able to see much more about the wizards of Middle Earth and from where they came. They are not merely wise old men, but a separate race entirely sent to Middle Earth by the Valar. Finally, the tale of "The Palantiri," explains the history and significance around the seeing stones found in Minas Tirith and Isenguard. In the end, following through this collection of tales will give the reader a great insight into the bulk of Tolkien's work that cannot be found anywhere else.

More summaries and resources for teaching or studying Unfinished Tales of Numenor and Middle-earth.