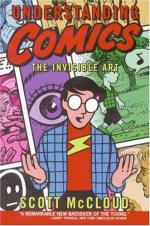 Scott McCloud
This Study Guide consists of approximately 30 pages of chapter summaries, quotes, character analysis, themes, and more - everything you need to sharpen your knowledge of Understanding Comics.

This detailed literature summary also contains Topics for Discussion and a Free Quiz on Understanding Comics by Scott McCloud.

In Understanding Comics, author Scott McCloud examines comics as an art form. Understanding Comics is truly a comics book written about comics as a literary and artistic medium. McCloud believes that comics have been in existence for centuries, although many great works of art are erroneously categorized as other art forms instead of comics. He explains the fundamentals of the genre, including the passage of time, depiction of motion, and broad interpretation by the reader as elements unique to comics.

McCloud also provides a detailed history of the medium, along with examples of various styles and strategies used. He peppers the book with examples of the works of some of the most well-known comics artists in the world, along with the techniques that make them notable in the evolution of comics. McCloud provides plenty of visuals in order to demonstrate each concept he introduces. McCloud contrasts the work of both Eastern and Western artists, and points out the influences of many non-comics artistic masters, including Picasso and Monet.

McCloud also introduces the concept of closure, or the means by which comics readers interpret the events that invisibly occur within the gutter, or space between individual panels in a comic. McCloud is actually so passionate about the subject that he essentially dedicates an entire chapter to this topic. Ample examples of each transition type, panel shape, and line style show the reader how each feature potentially adds a different element to the images portrayed.

The six steps involved in creating any art form are examined in detail. Although McCloud insists that all artists will follow some variation of this formula, he also makes the argument that only creators choosing to focus on ideas and concepts over form will actually elevate the medium to a higher level. McCloud briefly discusses the pros and cons of using color to illustrate images, especially by means of the traditional four-color process used in the United States.

The influence of Expressionism on comics is also reviewed. McCloud shows examples of ways in which different comics artists convey mood and appeal to the readers' senses. Emotion through use of different images is analyzed, either with or without the addition of word balloons and sound effects. McCloud would like to see the art of comics taken more seriously. He believes that more adult readers and literary critics would accept comics as an art form, similar to the written word, film, music, and theater, if it were made more sophisticated and appealing. The book is a theoretical examination of the steps necessary to move comics into a realm of greater appreciation and respect.

More summaries and resources for teaching or studying Understanding Comics.