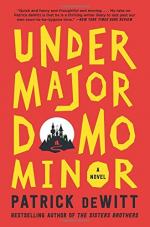 Patrick deWitt
This Study Guide consists of approximately 53 pages of chapter summaries, quotes, character analysis, themes, and more - everything you need to sharpen your knowledge of Undermajordomo Minor.

Lucy says goodbye to his mother and sets out for the Castle Von Aux as the book begins. Having nearly died from pneumonia, Lucy has been given a second chance at life by a mysterious stranger. He uses the chance to set off on an adventure in the hopes that something might happen.

Before leaving home, Lucy also says goodbye to his ex-girlfriend, Marina. Although he would have preferred to leave things on a high note, his plans are foiled when Marina shows up at the train station and catches him in a series of lies.

In a brief interlude, the narrator shares a tale of violence and envy that takes place a few villages away. In the story, a man is so enraged by his junior colleague’s advancement that he chops off three of his fingers.

Lucy takes the train to the Castle Von Aux, and starts his adventure with a run-in with a couple of thieves who continually steal his pipe. When Lucy arrives at the castle, he finds that a war is being waged in the nearby hills. Inside the castle, he finds that things are dark and cold and nearly abandoned. His boss, Mr. Olderglough, warns him about the Baron, and insists that Lucy be in his bedroom by ten o’clock so that he can lock himself in. Lucy learns that one of his new duties will be to deliver a daily letter from the Baron to the missing Baroness.

Lucy goes to the village to retrieve his pipe, and meets Klara, the daughter of the thief Memel. Sooner than later, Lucy is in love. He acquires a puppy and keeps it, for much of the novel, in his breast pocket.

Breaking a direct order, Lucy opens the Baron’s letter and finds that his new employer is poetic and tragic and suffering from the worst kind of unrequited love. That night, a strange man attempts to get into Lucy’s room, but Lucy has locked his door.

Lucy gets a note from Klara inviting him to her house. He goes to another village to get a new suit for work, and he purchases a cape for Klara. She likes the cape, and their relationship grows closer.

That night, Lucy happens across a bestial man creeping around the castle in the dark, eating a live rat. This man is the Baron.

The next time Lucy goes to Klara’s house, he is greeted by Adolphus, a handsome soldier, who states that he will be marrying Klara. Lucy almost gives up hope and returns home, but he is inspired by another one of the Baron’s letter and so decides to profess his love. His profession works, and he and Klara begin to date in earnest.

Lucy writes a letter to the Baroness, begging her to return for the sake of the Baron. After delivering the letter, Lucy immediately regrets his decision.

The relationship between Lucy and Klara continues to grow, but Lucy is suspicious of her true feelings for Adolphus, who has returned to war.

A letter from the Baroness arrives, expressing her intention to return. Lucy and Mr. Olderglough work tirelessly to restore the Baron to a fit state, and to revive the slumbering castle.

While waiting for the Baroness to arrive on the train, Lucy learns that his predecessor, Mr. Broom, died when he fell down the Very Large Hole.

The Baroness arrives. The Baron falls to his knees and weeps. They leave together, reunited at last.

While visiting Klara, Lucy learns that Memel became a thief because of a thief he met when he was a boy. The thief stole a tremendous amount of money from Memel’s father, who Memel was quite close with. Nonetheless, Memel professes that he believes a man ought to take what a man wants.

The next day two couples arrive as guests of the Baroness. They bring chaos into the castle. The three couples sit down for dinner, and begin to drink heavily.

Lucy sneaks into the ballroom for a quick romp with Klara. Afterwards, Klara leaves, but Lucy gets stuck behind a curtain when the nobles enter the ballroom. There he must hide while a twisted ritual involving sex, violence, food, cigars, and candles ensues.

Lucy goes to Klara’s and is heartbroken to see Adolphus has returned from the war, injured and in need of care. Lucy takes to bed because his heart is broken and he is depressed. He does not get up until Memel takes him for a walk and shares a story about how he killed his best friend, who slept with his wife.

Inspired by the story, Lucy decides to kill Adolphus. He tries to push Adolphus into the hole, but Adolphus dodges, and Lucy falls in. Inside the hole, he finds Mr. Broom and Tomas are alive and (sort of) well. The three attempt an escape. Lucy is the only one who makes it out.

Lucy returns to the village to kill Adolphus, but Adolphus is dead. Lucy learns that Memel is dead and Klara has gone to the ocean with the Baroness. Lucy says goodbye to his friends at the castle and gets on a train headed for the ocean. On the train, he runs into Father Raymond. They spot the stranger who saved Lucy’s life, but the stranger turns out to be a simpleton who cleans the floors of the church. The book ends with Lucy writing his own epitaph.

More summaries and resources for teaching or studying Undermajordomo Minor.