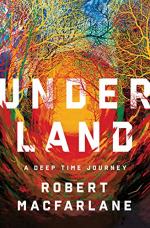 Robert Macfarlane
This Study Guide consists of approximately 74 pages of chapter summaries, quotes, character analysis, themes, and more - everything you need to sharpen your knowledge of Underland.

This detailed literature summary also contains Quotes and a Free Quiz on Underland by Robert Macfarlane.

The following version of this book was used to create this guide: Underland: A Deep Time Journey. Robert MacFarlane. W.W. Norton & Company, 2019.

In Underland, Robert MacFarlane travels to underground, often forgotten places in an attempt to understanding humans' impact on the earth and our relationship with landscape. The book explores underlands as they exist physically, in myth, history and in literature. MacFarlane draws on mythology and literature as well as a great deal of contemporary science to illuminate the places where he travels.

The book narrates the story of 11 journeys MacFarlane takes in an attempt to understand the underland. In each journey, he seeks out a guide or several guides to help him and he faces physical as well as mental challenges. During the journeys, he contemplates the inevitable death of himself, his family and humankind. The journeys start in England, near MacFarlane's home, and progressively become more physically and mentally challenging. In the first journey, he explores the cave systems in the Mendips in Somerset and acquires undersight, or the ability to see better underground. From there, he visits the mine under the ocean in Boulby, Yorkshire where he meets a mine safety expert who drives him to the farthest extent of the tunnels, which stretch out to the shipping lane under the North Sea. While visiting the mine, MacFarlane also meets a young physicist who studies dark matter, the tiniest particles in the universe, underground in the mine because the location provides insulation against radio waves and other interference. In the final journey of the first section of the book, MacFarlane goes to the Epping Forest in London with a mycologist who teaches him about the intricate connections in the understorey and beneath the soil in forests.

In the middle section of the book, MacFarlane travels to the Paris underground with a group of urban explorers and feels an intense sense of claustrophobia, especially while squeezing through a tiny passage under the Paris metro. Then he visits the Carso region in Italy and travels to the Timavo, an underground river. In the Slovenian Highlands, the site of much brutal fighting during WWI and WWII, he investigates sink holes that both sides used as execution sites and mass graves.

In the final section of the book, MacFarlane sets off on his most physically challenging journeys, traveling to the cave paintings in Lofotens, Norway by himself on foot and during a winter storm. Then he goes out to sea with a cod fisherman near Andoya, Norway. Near the end of the book, MacFarlane travels to Greenland and climbs glaciers. In Chapter 10, he witnesses a large calving event on the coast of Greenland and watches as a black pyramid of ice from deep inside the glacier rises in the ocean. The site makes him sick and forces him to contemplate climate change. In Chapter 11, MacFarlane descends into a moulin, a meltwater hole in the Knud Rasmussen Glacier. Inside the moulin, his crampons lose their grip and he swings back and forth as the waterfall inside pummels him. When his friends pull him to the top by ropes, he says he feels blue for days from the inside of the glacier. Finally, MacFarlane visits a nuclear storage facility in Finland where he is moved by people's collective, collaborative efforts to solve one of the world's biggest environmental problems.

More summaries and resources for teaching or studying Underland.