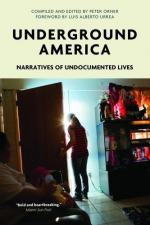 Orner, Peter
This Study Guide consists of approximately 47 pages of chapter summaries, quotes, character analysis, themes, and more - everything you need to sharpen your knowledge of Underground America.

Peter Orner is the editor of the compilation, Underground in America. As mentioned in the introduction, Orner holds a law degree and has practiced law. He uses a moment from this time—when Eduardo, a young Guatemalan man, is denied asylum—to frame his interest in this compilation of stories. He is also an author of both fiction and non-fiction. This is also reflected in the introduction: “as a writer I believe strongly in the power of stories to render absurd certain distinctions drawn by our laws” (8). In other words, Orner believes that stories have a tangible, practical “power” to enlighten and inform us as readers and citizens. He is partly responsible for the collection and ordering of the stories in Underground America.

Born in Tijuana, Mexico to an American mother and Mexican father, Luis Alberto Urrea is both a fiction and nonfiction...