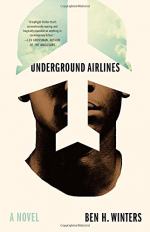 Ben H. Winters
This Study Guide consists of approximately 52 pages of chapter summaries, quotes, character analysis, themes, and more - everything you need to sharpen your knowledge of Underground Airlines.

The novel takes place in an alternative contemporary United States where Abraham Lincoln was assassinated shortly before taking office as president of the United States. In this reality the Civil War did not occur, slavery was never abolished and is still legal in four southern states, and America is considered to be a pariah to the rest of the western world due to its continued legalization of slavery.

As the novel opens, the narrator, identified as “Jim Dirkson,” attempts to convince a Catholic priest named Father Barton who he knows to be a high-ranking members of the Underground Airways group that helps escaped slaves flee the United States to help his wife escape from slavery. Father Barton refuses. Dirkson is quickly revealed to be a man named Victor, an African American U.S. Marshal who captures escaped slaves and returns them to the plantations they have fled. Victor is currently attempting to infiltrate the United Airways organization in order to locate and capture an escaped slave named Jackdaw. Victor identifies himself as someone without an actual, true identity who serves the Marshal’s service with little consideration of the moral nature and larger social and political consequences of his actions.

While in pursuit of Jackdaw, Victor takes interest in a woman named Martha Flowers and her young son Lionel. Martha, as Victor learns, is searching for information about her lover and father of Lionel, an escaped slave named Samson who was recaptured some time before the novel begins. Though Victor makes every effort to isolate himself from others and focus on his task, he nevertheless attempts to help Martha and her son. During the course of Victor’s investigation and assistance to Martha, he begins to feel sympathy for Jackdaw and reveals himself to be an escaped slave who, after many years on the run, was captured by the Marshal’s service and offered his eventual freedom in turn for working as a slave tracker for the Marshal’s service. Victor agreed and has spent the last six years traveling around the country, capturing escaped slaves and returning them to the plantations that own them.

Victor eventually locates Jackdaw, finding him hiding in a cave. Once he encounters Jackdaw, Victor realizes that he has been mislead. Jackdaw reveals that he is not an escaped slave, but rather an undercover agent named "Kevin" who is working on behalf of Underground Airways who entered into a plantation, pretended to be a slave, and gathered evidence of mistreatment and a conspiracy that, if revealed, might serve to put an end to legalized slavery. Kevin, however, refuses to hand over the evidence until his lover, who is a slave, is also released. Kevin is shot to death by agents working on behalf, seemingly, of the Underground Airways after he flies into a violent rage when told that his lover is dead.

After revealing that Underground Airways is conspiring with the government, Victor is given the option of going to the plantation Kevin is from and retrieving the evidence, or being track down and killed by the government. Reluctantly, Victor agrees and takes Martha with him to help him gain access. Victor is increasingly filled with self-doubt and confusion, especially in terms of his identity and the morality of his actions. Once he and Martha are permitted access to the GGSI facility, Victor finds evidence of the company’s overt abuse and brainwashing of slaves. Upon locating the evidence Kevin had hidden with a white truck driver in a restricted whites only living area, Victor realizes that the evidence does not pertain to abuse of slaves or illegal trade activated, but instead is a flask that contains a sample of genetic material being used to clone slaves who, by law, would be without identities and able to still be used on plantations if slavery is abolished.

After being confronted by people from Underground Airways, Victors discovers that members of Underground Airways are themselves undercover Marshals who have been manipulating Victor in order to obtain the evidence for the United States government. After the Marshal operatives are killed in a scuffle with Victor, Victor surrenders the flask to his handler at the Marshal’s service, who explains that the government had been cooperating with the southern plantations in developing cloned slaves for reasons even he does not understand. Victor’s tracker is removed and he is set free. However, instead of escaping from the United States, he stays with Martha and together they join an abolitionist movement and work to free more slaves from servitude.

More summaries and resources for teaching or studying Underground Airlines.