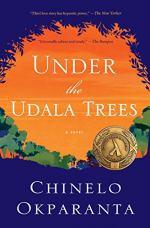 Okparanta, Chinelo
This Study Guide consists of approximately 36 pages of chapter summaries, quotes, character analysis, themes, and more - everything you need to sharpen your knowledge of Under the Udala Trees.

Under the Udala Trees Summary & Study Guide includes comprehensive information and analysis to help you understand the book. This study guide contains the following sections:

This detailed literature summary also contains Quotes and a Free Quiz on Under the Udala Trees by Okparanta, Chinelo .

The following version of this book was used to create this study guide: Okparanta, Chinelo. Under the Udala Trees. New York: Mariner Books, 2016.

The novel opens in Ojoto, Nigeria in 1967. The Nigerian Civil War has just begun. Ijeoma, the protagonist and narrator, is about ten years old. She lives with her father Uzo and her mother Adaora. Uzo is killed one day when an air raid drops bombs onto Ojoto. Adaora, unable to face the responsibilities of being a single parent, sends Ijeoma to live in another town. In the town of Nnewi, Ijeoma lives with a grammar school teacher and his wife. Meanwhile, Adaora moves to the town of Aba and opens a food store. One day, an orphan girl named Amina arrives in Nnewi. She is about the same age as Ijeoma, and Ijeoma persuades the teacher to take in Amina as well. Later, as Ijeoma and Amina enter their teenage years, they develop a sexual relationship. When the teacher discovers this, he sends Ijeoma to Aba to live with her mother.

Adaora attempts to use prayer and Bible studies as a means of altering Ijeoma’s sexuality. Adaora points out Bible stories and verses that, according to Adaora, demonize homosexuality. Ijeoma realizes that Adaora’s interpretations of the Bible are narrow-minded and that the Bible itself is merely the reflection of narrow, specific cultural beliefs. Ijeoma and Amina eventually attend the same boarding school, and they resume their romantic/sexual relationship. However, Amina eventually fears being found out, and she also fears that homosexuality may be immoral, as stated by the general surrounding culture. Amina therefore ends the relationship. After graduating from school, Amina marries a man, and Ijeoma feels hurt and betrayed.

After graduating from school, Ijeoma goes to Aba to live with and work for her mother. Ijeoma eventually meets a young local woman named Ndidi who works as a teacher. Ijeoma and Ndidi fall in love and have a secret relationship. However, after angry mobs kill several homosexual people in public, Ojeoma and Ndidi end their relationship. A man named Chibundu—who was a childhood friend of Ijeoma—suddenly proposes marriage to Ijeoma. Ijeoma accepts the proposal after heavy coercion from Adaora. Ijeoma and Chibundu live as a married couple in the city of Port Harcourt. Ijeoma is very unhappy in the marriage, as she has no romantic or sexual attraction to Chibundu. Chibundu is domineering and wishes to have a child immediately. Ijeoma, feeling she has no choice, allows Chibundu to have sex with her.

Ijeoma eventually gives birth to a daughter and names her Chidinma. Chibundu wants to have a son, and so he demands that he and Ijeoma try to have a child again as soon as possible. Ijeoma refuses, and Chibundu rapes her. Ijeoma eventually decides to leave the marriage, so she takes Chidinma and goes to her Adaora’s house. Adaora finally accepts that Ijeoma’s sexuality is not alterable. Ijeoma eventually resumes her relationship with Ndidi. They maintain their relationship for decades, although they must keep it secret so as to avoid persecution.

More summaries and resources for teaching or studying Under the Udala Trees.

Under the Udala Trees from BookRags. (c)2022 BookRags, Inc. All rights reserved.