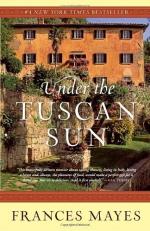 Under the Tuscan Sun: At Home in Italy Summary & Study Guide

Frances Mayes
This Study Guide consists of approximately 28 pages of chapter summaries, quotes, character analysis, themes, and more - everything you need to sharpen your knowledge of Under the Tuscan Sun.

Under the Tuscan Sun: At Home in Italy Summary & Study Guide Description

Under the Tuscan Sun: At Home in Italy Summary & Study Guide includes comprehensive information and analysis to help you understand the book. This study guide contains the following sections:

This detailed literature summary also contains Topics for Discussion on Under the Tuscan Sun: At Home in Italy by Frances Mayes.

UNDER THE TUSCAN SUN: AT HOME IN ITALY is the first in a series of three Tuscan memoirs by Frances Mayes. In this memoir, Frances Mayes recounts the purchase of her home, Bramasole, in Tuscany. When Ms. Mayes bought this home, it had been neglected for more than thirty years and was in desperate need of renovations. Ms. Mayes recounts the adventures she and Ed, her husband, had renovating the house and working in its gardens while enjoying the sights and food of Tuscany. Under the Tuscan Sun is a memoir that will leave the reader excited and full of appreciation for the world around them, no matter where their home might be.

Frances and Ed were in Cortona awaiting the completion of their purchase of Bramasole, a small home outside of the village as the book begins. Frances was very nervous about this purchase, concerned that she and Ed were sinking all their savings into a losing venture. However, once the long process of the purchase was complete and Frances and Ed were allowed to move into the house, the excitement of planning the renovations the house would need helped ease her fear. Frances and Ed immediately set about cleaning the house and removing old bottles that had been stored for years inside the many rooms.

Frances and Ed are forced to wait for permits before beginning the major renovations. In the meantime, Frances and Ed began clearing the terraces where their many trees and plants were growing. Frances and Ed also hired a man to fix a collapsing stone wall; in the process they meet a group of Polish men who would become both friends and reliable handymen. This process also introduced Frances and Ed to the work ethics of Italian contractors and the obstacles the language barrier would present.

Frances and Ed were forced to return to the United States earlier than they would have liked in order to return to their jobs as professors at two different universities. Upon their return the following summer, Frances and Ed learned their new well had been dug and there would be plenty of water for their everyday needs, a relief after suffering from a dry well the summer before. Frances and Ed would also learn that their permits had come through and work could soon begin on the house. Frances and Ed hoped the work will be complete in time for them to spend Christmas at Bramasole with Frances' daughter, Ashley. However, this did not happen.

When Frances and Ed returned to Bramasole over the Christmas break, they discover that the house is a mess. The workers did not bother to clean up after themselves and even wrote a phone number in permanent ink on the fresco in the dining room. Frances, Ed, and Ashley ended up spending Christmas at the home of a friend in Cortona. The work was finally finished the following spring. Frances was happy with the work and excited to begin living at Bramasole. Frances and Ed had a table built to set out under the trees where Frances had imagined having long meals with Ed and visitors to their home since first seeing Bramasole.

When Frances published this memoir, she did not expect it to sell as well as it did. Later, when Disney decided to make a movie based on the book, Frances was thrilled. Frances read through the script and found that it kept intact the spirit of the book, which to her was the most important thing. Frances and Ed arrived in Tuscany that summer just in time to watch the movie being filmed in a house nearby that had been renovated to look just like Bramasole. Frances found it amusing to watch the filming. It seemed everyone in the village was an extra in the film, adding to the excitement of the moment.

More summaries and resources for teaching or studying Under the Tuscan Sun: At Home in Italy.

Under the Tuscan Sun: At Home in Italy from BookRags. (c)2022 BookRags, Inc. All rights reserved.