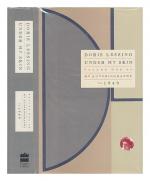 Under My Skin Summary & Study Guide

Doris Lessing
This Study Guide consists of approximately 31 pages of chapter summaries, quotes, character analysis, themes, and more - everything you need to sharpen your knowledge of Under My Skin.

Under My Skin Summary & Study Guide includes comprehensive information and analysis to help you understand the book. This study guide contains the following sections:

This detailed literature summary also contains Topics for Discussion and a Free Quiz on Under My Skin by Doris Lessing.

The book, "Under My Skin" by Doris Lessing is an autobiography. This book covers her life from birth to 1949.

Doris begins the story with a brief trip through the family tree of both her mother and her father. Her mother, Maude, is a nurse during World War I, and loses the man she loves when his ship sinks at sea. While she is mourning him, she meets Doris' father, Alfred, while he is recuperating from the amputation of his leg, and from depression, at the hospital where she works.

Maude and Alfred Tayler are married, and when the war ends, Alfred is hired by the bank that employed him before the war to take a position in Persia, where the family lives for five years. It is here that Doris and her brother Harry are born. The Taylers do not miss England, nor look forward to returning there or to another bank posting, so when they return to England they began seeking a way to leave the country.

The family move to Southern Rhodesia, participating in a program created by the white government of Southern Rhodesia to colonize the country with farmers who are offered land for a small loan. Doris' years on the farm teach her the value of hard work and she becoems skilled at many chores and labors that most British children will never experience. Her schooling is through her mother's teachings and from reading books. Doris does not do well with the social structures of most boarding schools, so ends her official schooling when she is 15.

Doris' father soon decides he is tired of the fighting and arguing between Doris and her mother, and Doris is sent to find work in Salisbury. Doris marries Frank Wisdom when she is 19, and soon finds herself with two young children. Doris realizes that she is constantly making plans to be independent and free to travel, but continues taking actions that tie her down. Her restless spirit takes her on forays into communism, sexual promiscuity and, eventually, leaving her children and her husband to seek happiness in other ways.

Doris marries Gottfried Lessing, and has another son, Peter. Faced with an independent spirit, a restless yearning for something better, and a strong positive outlook on her ability to do anything, in 1949 Doris leaves Gottfried and moves herself and her son Peter to London to start a writing career.

More summaries and resources for teaching or studying Under My Skin.

Under My Skin from BookRags. (c)2022 BookRags, Inc. All rights reserved.