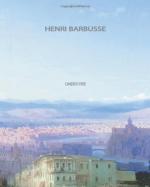 Under Fire Summary & Study Guide includes comprehensive information and analysis to help you understand the book. This study guide contains the following sections:

This detailed literature summary also contains Topics for Discussion and a Free Quiz on Under Fire by Henri Barbusse.

Under Fire: The Story of a Squad by Henri Barbusse provides a gripping first-hand account of life and death in the trenches of the Western Front during World War I to be published. With most of the narrator's comrades killed, a group of survivors from various units debates matters of war and peace, nationalism and justice, and then return to battle.

Under Fire: The Story of a Squad by Henri Barbusse opens in the peaceful Alps as a group of intellectuals contemplate the coming horror of World War I. They hope that the soldiers who survive will force the world to change its ways. The unnamed narrator, who takes notes with an eye to writing a book, is assigned to a squad of diggers who fortify the front-line trenches on demand. They work by night and loaf by day. Much of the action takes place during rest periods between assignments.

When two men, Volpatte and Fouillade, are detached from the squad and lost, searchers are sent out. Volpatte is sent to the rear for repair of his wounds, while several of his comrades become enamored of a beautiful girl, Eudoxie, while enjoying a lovely rest period in Gauchin-l'Abbé. Lamuse grows depressed when Eudoxie rejects him. Eudore uses his leave to visit his wife for the first time in 15 months, but manages only a half-minute kiss. Volpatte returns from the rear livid about the "shirkers" who function there.

The narrator describes various vignettes, including Fouillade's recollection of his Mediterranean home a visit a local tavern. Poterloo takes the narrator on a "pilgrimage of peril" to Souchez, which has been leveled and tells him of recently sneaking into Lens to see his wife, only to find her flirting with German officers.

The story intensifies when the squad is sent to Hill 119, where the opposing armies are 100 yards apart. What begins as a beautiful fireworks display turns into a deadly "avalanche of fire and iron." The squad is ordered into battle, is caught in a wall of "barrage fire," and the few members release blood lust on the token German defenders. The narrator sees in a Refuge center the horrors of the walking wounded until a bombardment destroys it. While digging a New Trench in "No Man's Land" on a raw, rainy night, the squad again experiences barrage fire but the real damage is done by nature, as rain and a shallow water table turn the trenches and holes into deadly sucking mud. The few survivors talk philosophically about war and peace, justice, equality, and hope, before resigning themselves to return to the fighting.

Under Fire from BookRags. (c)2022 BookRags, Inc. All rights reserved.