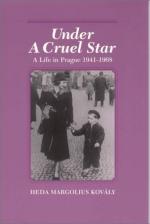 Heda Margolius Kovaly
This Study Guide consists of approximately 30 pages of chapter summaries, quotes, character analysis, themes, and more - everything you need to sharpen your knowledge of Under a Cruel Star.

Under a Cruel Star: A Life in Prague 1941-1968 Summary & Study Guide Description

Under a Cruel Star: A Life in Prague 1941-1968 Summary & Study Guide includes comprehensive information and analysis to help you understand the book. This study guide contains the following sections:

This detailed literature summary also contains Topics for Discussion and a Free Quiz on Under a Cruel Star: A Life in Prague 1941-1968 by Heda Margolius Kovaly.

AHeda Margolius Kovály née Bloch, a Jew, and her family were forcibly evacuated from their home in Prague to the Lodz Ghetto during October 1941. They remained there as conditions deteriorated and the family lost at least one cousin during this period of incarceration. The family otherwise remained more or less intact for three years until about September 1944 when they were forcibly evacuated to Auschwitz concentration camp. There, Kovály's mother was immediately gassed and burned and her father was separated from her. Kovály reports that none of her relations survived the holocaust. Kovály survived the initial selection at Auschwitz and was sent into forced labor. She performed various tasks for about two months, including one prolonged period doing backbreaking labor at a brick factory. In October, 1944, Auschwitz was evacuated in the face of the Russian advance. Kovály and other girls were force-marched west. With several friends, Kovály escaped and returned to Prague where she was effectively sheltered by partisans until the end of the war.

After the war Kovály was reunited with Margolius and they were soon married. Their son Ivan was born 1947. Both joined the Communist Party and Margolius worked in government throughout the change-over to Communist rule c. 1948. Margolius was arrested in 1951 and executed in 1952 during a party purge. In 1953, following a prolonged bout of serious illness, Kovály remarried Pavel Kovály. The Kovály family was ostracized and hazed until c. 1956 when Margolius was officially rehabilitated. Ivan, reared with an assumed name to avoid political persecution, relocated to Great Britain as a young man, and Kovály then lived a relatively productive and peaceful life until 1968 when the Soviet military occupied Czechoslovakia. After a brief period of turmoil, she fled the country and subsequently published her memoirs.

More summaries and resources for teaching or studying Under a Cruel Star: A Life in Prague 1941-1968.