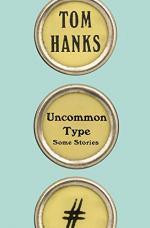 Plot Summary
+Chapters Summary and Analysis
Three Exhausting Weeks - Steve Wong is Perfect
Welcome to Mars - A Special Weekend
Our Town Today with Hank Fiset: An Elephant in the Pressroom - Your Evangelista, Esperanza
A Junket in the City of Light - These Are the Meditations of My Heart
Christmas Eve 1953 - Go See Costas
Free Quiz
Characters
Symbols and Symbolism
Settings
Themes and Motifs
Styles
Quotes
Order our Uncommon Type Study Guide

Hanks, Tom
This Study Guide consists of approximately 36 pages of chapter summaries, quotes, character analysis, themes, and more - everything you need to sharpen your knowledge of Uncommon Type.

The following version of this book was used to create the guide: Hanks, Tom. Uncommon Type. 2017, Vintage Books.

Uncommon Type is broken into seventeen short stories with some focusing on the same characters. The rest of the of the collection consists of individual stories that are linked to the others by the use of a typewriter and other common themes such as change or family dynamics.

Three of the stories center around a group of four friends: an unnamed narrator, Anna, MDash, and Steve Wong. In “Three Exhausting Weeks,” the narrator and health-nut Anna date, against the advice of their friends. As Anna is too energetic and busy for the narrator, the relationship comes to an end when the he becomes ill and wants to live by his own rules again. In “Alan Bean Plus Four,” futuristic elements come into play when the four build a real rocket and travel around the moon, plummeting back to Earth and landing in the ocean. The last story in the collection is “Steve Wong is Perfect.” Steve Wong demonstrates his extraordinary bowling skills and his friends have to help him cope when he unwillingly receives his five seconds of fame.

The shortest four stories in Uncommon Type are the columns of Hank Fiset, a newspaper reporter with a preference for the tried and true typewriter. Throughout the columns, Hank Fiset’s key tool is wit as he recommends places to eat and shops to visit in New York City, recalls his own experience purchasing an old typewriter, and portrays Esperanza, a woman who uses the typewriter to help those at her local coffee shop free of charge.

None of the other stories deal with the same characters, but some share common themes. Both “Welcome to Mars” and “A Special Weekend” focus on young boys who live in less-than-ideal familial situations. In “Welcome to Mars,” almost-ten-year-old Kenny Stahl’s mother picks him up for a birthday weekend. Kenny’s parents split up years ago, but upon returning to the town where he was born, the young boy recalls fond memories of when his parents were still together. Now, his mother has a new boyfriend, although Kenny never realizes. “Welcome to Mars” centers around Kirk Ullen who is celebrating his nineteenth birthday. Going surfing with his father, a previous hobby that the two have not enjoyed together in a while, Kirk discovers that his father is in a relationship with an unknown woman, meaning that he is cheating on Kirk’s mother. The two never surf together again.

There are a number of stories whose plots surround a key element of change. These include “A Junket in the City of Light” in which budding actor Rory Thorpe receives his acting break, only to find out that not all aspects of the job are glamorous. “A Month on Greene Street” introduces middle-aged mother of three, Bette Monk who moves her family into a new home that should be filled with such promise, but whose potential seems somehow tainted by the affection Bette receives from her quirky neighbor, Paul. “Who’s Who?” is about young Sue Gliebe who has just moved to the Big Apple hoping to make it on Broadway, but a depleting supply of money and roommates who detest her stand in her way. An unnamed, young, female narrator who has just gone through a break up finds solace in the company of her newly-purchased typewriter in “These Are the Meditations of My Heart,” and “Go See Costas” features Bulgarian-born Assan who works his way to New York City and needs to find a job as soon as possible.

There are three outlying stories remaining that are more individualistic and have less in common with the others in the collection. In “Christmas Eve 1953,” Virgil Buell is a typical American fathering planning a great Christmas for his wife and three young children. Around midnight, however, he receives his annual phone call from his old friend Bud, and it is revealed that the two are forever linked by the death and gore of their comradeship in the Second World War. “The Past Is Important to Us” offers a glimpse of the life of sixty-year-old billionaire Bert Allenberry who spends $6 million dollars per 22-hour vacation for trips back in time to the 1939 World’s Fair. Bert is taken by a young woman named Carmen who was at the fair that day, and not heading the time frame provided for him by Chronometric Adventures, his bones break and his atoms pull apart from one another, effectively killing Bert in 1939. The remaining story is “Stay with Us,” also focusing on a rich character, the forever-excited F.X.R. who fakes being a poor western man as he scopes out a hospitable highway hotel looking to purchase land in the area.

More summaries and resources for teaching or studying Uncommon Type.