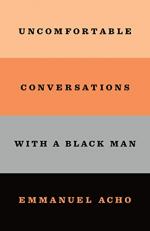 Emmanuel Acho
This Study Guide consists of approximately 32 pages of chapter summaries, quotes, character analysis, themes, and more - everything you need to sharpen your knowledge of Uncomfortable Conversations With a Black Man.

This detailed literature summary also contains Topics for Discussion on Uncomfortable Conversations With a Black Man by Emmanuel Acho.

The following version of this book was used to create this study guide: Acho, Emmanuel. Uncomfortable Conversations with a Black Man. New York: Flatiron Books, 2020.

In the Introduction section, author Emmanuel Acho introduces himself and addresses the audience. He is a Black man and an activist for racial justice. He states that the primary intended audience of the book is white people. He asserts the book’s purpose as a guide to racism in America, and a tool to help the reader more actively confront issues of racial injustice in America.

In Chapter 1, Acho writes about the topic of how to refer to Black people. He covers the histories of some terms that are now considered derogatory. He states that the politically correct terms are Black or African-American, and preference differs by individual. In Chapter 2, Acho discusses ‘implicit bias,’ which refers to racist actions that are generally undertaken unconsciously. Acho gives some examples of implicit bias, as well as strategies for recognizing implicit bias in oneself and others. In Chapter 3, Acho explains the concept of ‘white privilege,’ which refers to the fact that white people in America do not face any significant race-based discrimination. Acho dispels certain myths and misconceptions that often surround the concept of white privilege.

In Chapter 8, Acho address the idea of ‘reverse racism,’ which is a fear held by many white people that they face the threat of discrimination at the hands of non-white people. Acho explains that, because of how racial power structures in America exist, it is impossible for non-white people to enact racist policies against white people. In Chapter 9, Acho addresses specific racist laws and policies. He explains that there are many policies in place in present-day America that infringe on non-white Americans’ rights, such as voting. In Chapter 10, Acho discusses the fact that Black Americans are arrested and incarcerated at far higher rates than white Americans. He examples some of the racist policies that contribute to these injustices.

In Chapter 11, Acho discusses the fact that single-parent families are more common among Black American populations. This higher rate of familial instability is caused by external factors—such as the legacy of slavery and many other factors of racial discrimination—and not by anything that is inherent to Black people themselves. In Chapter 12, Acho discusses the topic of interracial relationships. He discusses laws from American history that have governed interracial relationships. He also notes that if the reader is in an interpersonal relationship, it is important not to fetishize one’s partner. It is also important to become well versed in Black history and culture.

In Chapter 13, Acho discusses the topic of protesting. He notes that Black-led protests are portrayed in a far more negative light in American media than white-led protests. Acho asserts the vital nature of protesting in advancing social progress. He urges the reader to become involved in protests and activism whenever possible. In Chapter 14, Acho discusses the concept of ‘allyship,’ which refers to white people who contribute to causes of racial equality. Acho gives some advice on how to be an effective and helpful ally, rather than a counterproductive one. In Chapter 15, Acho discusses some of the mindsets that the reader will need to adopt during their long-term commitment to anti-racism. Acho then ends the book with some additional advice and further resources for the reader, as well as some explanations of certain aspects of Black culture.

More summaries and resources for teaching or studying Uncomfortable Conversations With a Black Man.