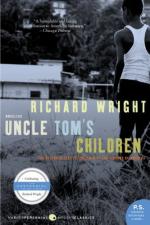 How is the flood in "Down by the Riverside" a liberating experience for Mann? How is it an oppressive experience? What does this say about the difference between manmade laws and the laws of nature? How does Mann fare within each set of laws?

Characters such as Big Boy, Silas, Mann and others must try to persevere in a nasty, brutish world that seems set against them. Where do they draw the strength that keeps them going?

Uncle Tom's Cabin is the title of a famous novel written before the Civil War that harshly criticizes the South and slavery. What might Wright be saying by calling his work Uncle Tom's Children? Has the situation of his characters changed much from slavery?

With particular attention paid to "Fire and Cloud" and "Bright and Morning Star," describe Wright's treatment of religion versus communism. In what ways...