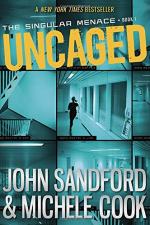 John Sandford and Michele Cook
This Study Guide consists of approximately 50 pages of chapter summaries, quotes, character analysis, themes, and more - everything you need to sharpen your knowledge of Uncaged.

A hundred or more pink-faced, humanlike rhesus monkeys were isolated in separate Plexiglas cages. The tops of their skulls had been cut away and replaced with glass or plastic caps, and computer modules were strapped to the animals’ backs.”
-- Narrator (chapter 1 paragraph 55)

Importance: This is one of the first insights into the sinister nature behind Singular, the main antagonistic force in the book.

The Eugene lab was critical to the interface research. They had other labs, in other countries, where they could do the kind of research that would put them in jail in the United States. But those countries didn’t have the necessary intellectual or technical resources. They needed Eugene and the other secret facilities in America, but if the public learned about what they were doing there…”
-- Odin (chapter 3 paragraph 62)

Importance: This is one of the first signs that the labs were not only up to something malicious, but it hints at them being part...

More summaries and resources for teaching or studying Uncaged.