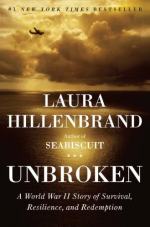 Laura Hillenbrand
This Study Guide consists of approximately 29 pages of chapter summaries, quotes, character analysis, themes, and more - everything you need to sharpen your knowledge of Unbroken.

This detailed literature summary also contains Topics for Discussion and a Free Quiz on Unbroken: A World War II Story of Survival, Resilience, and Redemption by Laura Hillenbrand.

Unbroken is the true story of Louis Zamperini, a promising young Olympic runner from Torrance, California, who was called into service on a bomber crew in the Pacific in World War II. Zamperini's plane went down in the Pacific Ocean and he and two other survivors drifted over 40 days living on rainwater and the occasional fish or bird they could catch. One of the crash survivors died on the raft. Zamperini and the other survivor, the plane's pilot, were finally nearing land when they were captured by the Japanese navy. The Japanese did not inform America of the capture of Zamperini, and after some time he was declared officially dead. His family in California refused to give up hope that he might return alive, however.

The men were treated gently at first, given time to recuperate in a hospital. They were then suddenly transferred to a Japanese prisoner camp where they expected they would be executed. Because of his relative fame as an Olympic runner, Zamperini was selected for especially harsh treatment by the Japanese guards, but he was not killed. He was sent to a series of prisoner camps, eventually arriving at a camp in Tokyo where he received particularly brutal treatment by a guard the men called "The Bird." Japanese propagandists attempted to force Zamperini into making pro-Japanese broadcasts to America, but he refused and was severely punished.

Louis was in a prison camp in Tokyo when American forces dropped the atomic bombs on Japan that led to surrender. Cut off from news, the prisoners knew almost nothing about the tide of the war until their guards informed them it was over. Louis was hospitalized and eventually sent home to Torrance, to the delight of his family. His life became troubled, however. He married a young woman after knowing her for only two weeks. He was disturbed by flashbacks to his days as a prisoner and had terrible dreams of being beaten by The Bird. He began to drink excessively and his wife told him she wanted a divorce.

Zamperini's life was turned around after a visit to a revival meeting staged by the young Billy Graham, an evangelist Christian preacher. He saved his marriage, quit drinking, and found his nightmares diminishing. He began giving talks and making appearances telling his story. He even found it possible to forgive The Bird for his brutality.

Zamperini had thought that The Bird had committed suicide after the war, but he had actually escaped and eluded capture for years while he was hunted down by Japanese police for his war crimes. Upon learning that The BIrd was still alive, Zamperini tried to arrange a meeting with him. He traveled to Japan, but The Bird refused to see him.

More summaries and resources for teaching or studying Unbroken: A World War II Story of Survival, Resilience, and Redemption.